Touring MLB All-Americans Honor Alexander Cartwright in Hawaii, January 23, 1923
The Digital Archives of Hawaii is in development and offers some interesting artifacts available for public view. As of September 2022, a keyword search for “baseball” results in only 20 results: https://digitalarchives.hawaii.gov/searchResults?query=baseball
Among those results is a photo of former Hawaii governor Sanford Dole, identified in the archive description simply as: “with baseball players.” 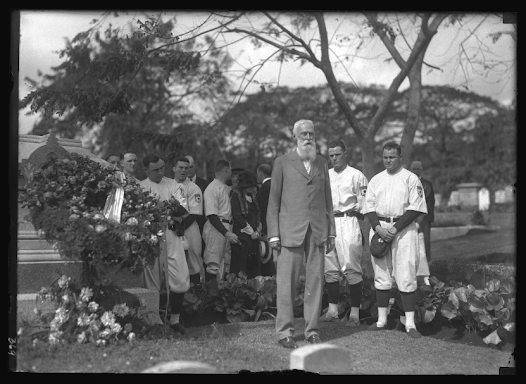 Fortunately, clicking on the image serves up a high-resolution version of the photo, and closer inspection reveals that the uniform of the players is that of the All-American major league ballclub that toured Japan in December 1922.

Images: (left) Close up of US-Japan patch on left arm of uniform; (right) hat of 1922 All-American uniform.
A zoom of the photo also revealed the location as the grave site of Baseball Hall of Famer Alexander Joy Cartwright in Honolulu, Hawaii. According to the HOF, Cartwright is “often cited is as a major contributor to the origins of modern American baseball.” https://baseballhall.org/hall-of-famers/cartwright-alexander 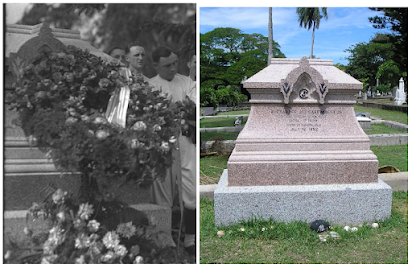 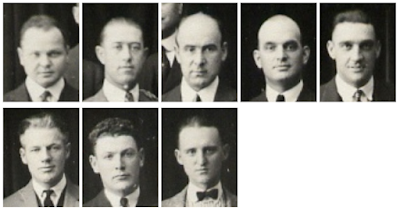 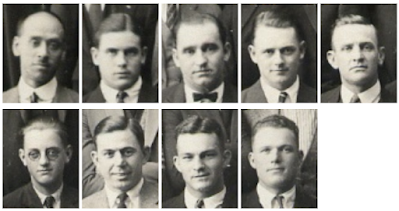 Above image: (L-R): Unknown Man, Luke Sewell, Bert Griffith, Waite Hoyt, Casey Stengel, George Moriarty Jr. (bat boy), Fred Hoffman, Riggs Stephenson, Bibb Falk
**
With the help of the information on newspapers.com and vintageball.com, I was able to determine the people, place and exact date of the photo. Based on my research, the new description is: 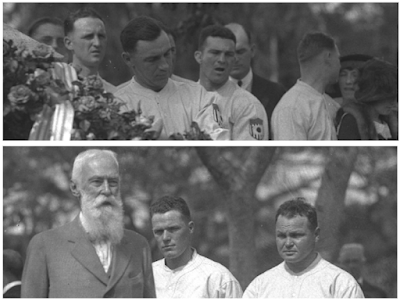 Major League Players and High Officials Place Wreath on Cartwright Grave, Pay Oral Tribute
Organized baseball today paid tribute to its founder. Beneath the drowsy shade of palm trees in Nuuanu cemetery there gathered about the tombstone of Alexander Joy Cartwright early this afternoon the members of the All-American baseball party, major leaguers who have been touring the Orient and are now on their way home.
In their neat white uniforms that contrasted strangely against the green background, they stood with bared heads while an immense wreath was laid upon the grave and while Sanford B. Dole, first president of the Hawaiian Republic, Herb Hunter, of the baseball party and Wallace R. Farrington, governor of Hawaii, paid oral tribute to the memory of one of the island's greatest citizens.
Judge Dole briefly sketched the career of Alexander Joy Cartwright how he organized the Knickerbocker Baseball Club of New York, stepped off the first diamond, drew up the first set of rules and engineered the first game of organized baseball. Then he told how Cartwright went west with the gold rush of 1849, spreading the game as he went along until he came to Hawaii.
Dole Remembers Him
"I remember him well." said Judge Dole, "a great big broad-shouldered man who had no trouble In quelling a riot single-handed one day on the docks here. Of course his playing days were over when I came to Hawaii, but I recall him many times as being called upon to settle disputes. Judge Dole pointed out that it was Cartwright's work that influenced baseball to become a national game rather than being confined and remaining provincial to the eastern seaboard. He added that the climate here was the kind that permitted baseball the year around and that while Hawaii may not have produced great stars, it made up for in enthusiasm what it lacked in ability thus far. Herb Hunter, in charge of the All-American baseball party, made the speech In conjunction with the laying of the wreath.
Speech By Hunter
Hunter said: "When we left home a few months ago, pronounced as "Baseball Pilgrims" on a tour of the Orient, determined as we were to bring out the importance of base-ball in international friendships, little did we realize such an honor as is ours at this moment. "One of the pleasantest features are of this tour is the opportunity A here in your beautiful city of Honolulu to set aside a few moments of this delightful day to show and to express our deep respect as baseball players of today to the memory of the man who is largely responsible for starting the game of baseball on its way to its present high state of development. Because we believe that baseball is an honorable and characteristic element of American life, we take this opportunity to pay our tribute to its founder by placing this wreath on his last resting place. “May God bless his memory and keep the great American game at which he founded true the highest ideals of American sportsmanship.
Governor Speaks
Governor Farrington followed, on behalf of the territory, expressing the gratitude of the island people and the major leaguers paying tribute to a fellow island citizen. He also spoke highly of present-day players and mentioned the fact that baseball has developed ably as a professional sport and is still maintaining the ideals of sportsmanship which had been prevalent in 'the days when Alexander Joy Cartwright had organized the game. "He is a man who still lives in the hearts of the old and young of the American people," said the governor, "for the American people all know and enjoy the great game of baseball." Those Present Present at the ceremony was Bruce Cartwright. Jr., grandson of the founder of baseball; Mrs. Cartwright and the children, William Edward, aged 9. Coleman. aged 7, and Virginia, aged 11. Among those present who knew the founder personally there was James A. Wilder and Gerrit P. Wilder. Many members of the Rotary Club were present, coming to the ceremony directly after the noon meeting. 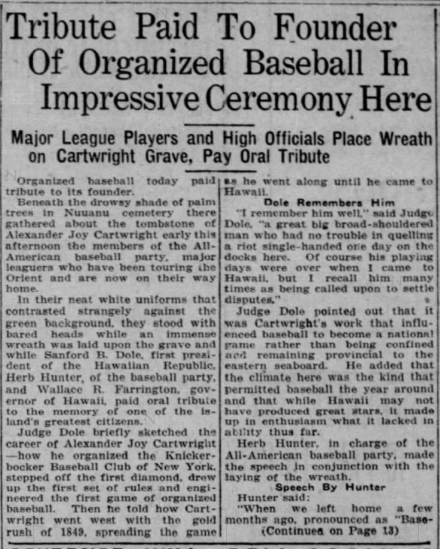