Even if you’re not a baseball fan, the odds are good that you’ve heard the name Shohei Ohtani. Known to his Los Angeles Angels teammates as “Shotime,” Ohtani is star player from Japan who can do it all – pitch, play outfield, hit home runs, and drop a sacrifice bunt. Prior to signing a major league baseball (MLB) contract in 2018, Ohtani was a member of the Hokkaido Nippon-Ham Fighters of the Nippon Professional Baseball (NPB) Pacific League. 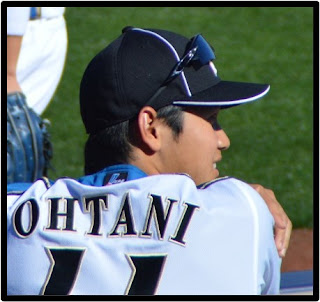 Between 2015-2017, his Hokkaido ballclub trained in Arizona, and during that time many fans in the Valley (including me) got a close-up look at the rising star. (Photo left: Ohtani in Peoria, AZ). Ohtani really enjoyed his time in Arizona as well, which was reported as one of the reasons he signed with the Angels, who hold their spring training in Tempe.

Billed as the “Babe Ruth of Japan,” Ohtani is a proven MLB star. And he now has a chance to make history as the first Japanese-born player to participate in the Home Run Derby, a slugfest held the day before the All-Star game at Coors Field, in Denver, Colorado, on July 13.

This historic first for a Japanese baseball player not only coincides with the 85th anniversary of the founding of the Japanese professional baseball league – it seems to mirror a historical pattern of society celebrating Japanese baseball in the midst of a rise in anti-Asian sentiment, as  a similar dynamic unfolded in Arizona back in 1936. 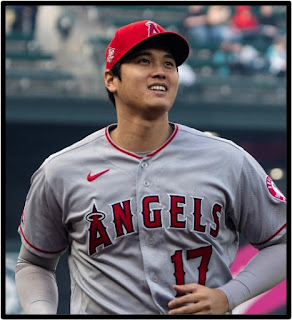 The first professional baseball league was founded in Japan in 1936 and was comprised of seven teams – three based in Tokyo, two in Osaka, and two in Nagoya. Among them was the Dai-Nippon Tokyo Giants, who had toured the U.S. the prior year. In preparation for the inaugural season in Japan, the team returned to the U.S. for “spring training.” The Tokyo Giants played teams throughout the southwest, including a stop in Phoenix, Arizona, in April 1936.

The timing of the team’s visit was significant, as anti-Japanese attitudes were rampant in Arizona at the time. The Great Depression fostered resentment among white farmers in the Salt River Valley towards financially successful Nikkei farmers. In the summer of 1934 white vigilante farmers formed the Anti-Alien Committee, which eventually led to acts of domestic terrorism – including the bombing of Nikkei-owned farms in Glendale. According to the U.S. census, the hostile climate resulted in Arizona’s Nikkei population dropping nearly 30 percent, from 879 in 1930 to 632 in 1940.

This set the stage for the visiting Tokyo Giants in Arizona. The team arrived at 8 a.m. in Phoenix via train from Yuma, and were greeted by several state, local and civic leaders, including: Governor Benjamin Baker Mouer (grandfather of JACL-AZ friend, Kelly Moeur), Phoenix Mayor Joseph S. Jenckes, R. Fugii, president of the Japanese Young Men’s Association, Togo Iida, JACL-AZ president, and Henry Yoshiga, chairman of the JACL-AZ social committee. 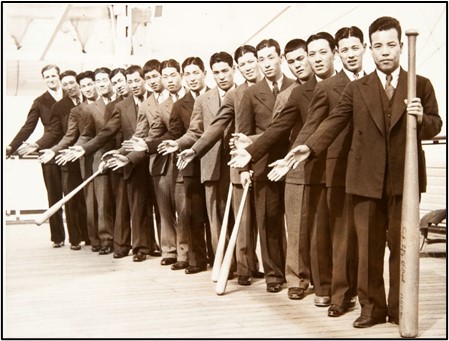 The Giants were given a morning tour of the Valley by JA community leaders, and a luncheon followed with over 60 guests, including the Governor Mouer, Mayor Jenckes, and Stanley Gilbert, president of the 20-30 Club.

The highlight of the day was a baseball game at 3 p.m. at Phoenix Union High School Stadium, between the Tokyo Giants and Otto Wolfe’s Phoenix All-Stars. “Tokyo Giants Wallop All-Stars in Lovely Tussle, 9-2,” read the headlines the next day. According to the press, “(Haruyasu) Nakajima, the ‘Babe Ruth of Japan,’ was the batting star of the game.”[1]

The visiting Giants may have helped dampen the flames of anti-Asian resentment in the Valley, if only for a day. Their visit also created an opportunity for Henry Yoshiga of the JACL-AZ chapter to emerge as a leader in the community. Yoshiga, owner of the Six Points Motor Company, served as interpreter for the visiting Giants during their visit in Phoenix. He spoke Japanese AND baseball. He was a baseball enthusiast who once played first base and captained the 1915 Mills High School team in Honolulu, HI.

A few months after the Giants’ visit, Yoshiga proposed to take the University of Arizona baseball team to Japan. Yoshiga offered his services as an interpreter to coach John “Pop” McKale for the barnstorming Wildcats.[2] The UofA Japan tour never materialized, but Yoshiga’s efforts highlight the positive role of sports in breaking down barriers and creating opportunities for people of all backgrounds to find a common, shared humanity.

The Tokyo/Yomiuri Giants went on to become one of the most successful teams in Japanese baseball history, winning their first championship in 1951. Yoshiga would not live to see it. Sadly, he died on April 21, 1949. According to his obituary, Henry Tadao Yoshiga was born in Hiroshima, Japan, in 1891, and moved to the U.S./Hawaiian Territories in 1913. He arrived in Arizona, via New Mexico, in 1931, where he became a respected member of the JA community, an active member of Free Methodist Church, and a pioneering member of the JACL-AZ chapter.[3]

So, as Shohei Ohtani makes history this season, let us pause and celebrate the 85th anniversary of professional baseball in Japan, and appreciate the small role the Arizona JA community – and Henry Yoshiga, specifically – played back in 1936 when it all first started.