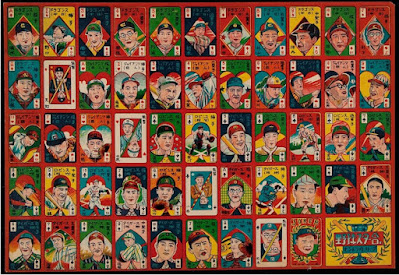 Back in 2012, I purchased a framed uncut sheet of baseball cards from early 1950s Japan known as the "JCM 21 set" and have had it hanging on the wall of my home office since. Shortly after I celebrated my 52nd birthday (in late 2021), someone cracked a joke about me “no longer being a card short of a deck.” With 52 cards top of mind, I saw the framed artwork in a new light and realized that after all these years I only knew the identity of two players – Babe Ruth (the Joker) and Tetsuharu Kawakami (the Three of Hearts).

Perhaps doubly inspired by my 52nd birthday and the quote, “Chaos is merely order waiting to be deciphered,” I made the decision to closely examine the JCM 21 set to learn more about the cards and gain some understanding as to who the players were and why they were selected.

To the untrained eye, the set appears to be a random selection of Japanese ballplayers presented in the form of a deck of cards. After taking a deep dive into the design elements within this fantastic work of art and the history that surrounds it, I now see that any suggestion of randomness is the furthest thing from the truth.

Closer inspection reveals that the people represented on this sheet – including Babe Ruth – were selected for a reason. The teams and players reflected on this canvas were selected with careful consideration, and deliberate intention and they depict a milestone moment in the history of Nippon Professional Baseball (NPB).

Background The word “menko” in Japanese means “small object with a face,” as early menkos featured the face of a person or animal. Menko dates back to the Edo Period (the early 1700’s) and the earliest versions were made of dried mud or clay. Over time, the material used for making menkos expanded to include tile, wood, metal, and eventually the paper used in baseball cards. Learn more about the fascinating history of menko here.

I reached out to Engel and inquired about the rationale behind the set name. In an email exchange he explained, “JRM is an acronym for Japanese Round Menko. JCM is an acronym for Japanese Rectangular Menko. At the time, I chose the ‘C’ (in JCM) because it is a letter that does not appear in the word, ‘round’.” (Note: Technically, menko that are not round also have “corners,” so my “beginner’s mind” keeps converting JCM to “Japanese Cornered Menko.” I humbly share this as an alternative meaning for the menko collecting community.)

When the first edition of The Guide was developed in the early 1990s, Engel assigned numbers to all JRM and JCM sets in chronological order. As the years passed and more sets were added with the publication of each new edition, the numbering system picked up where the previous edition left off. Thus, the 21st Japanese Rectangular Menko set that appeared in The Guide earned the name “JCM 21”.

Engel confessed, “At this point, there are probably at least five times as many sets as were included in the first edition (of The Guide). Therefore, the numbers are no longer chronologically organized.”

The set itself is comprised of 53 cards, each one measuring approximately 1 1/8” x 2 1/16”. The design gives the impression that the set is intended to be used as a deck of cards, but Engel says that might not be the case. “I have personally seen or purchased several hundred JCM 21 uncut sheets over the years,” he said. “I believe that the cards were issued only as uncut sheets.  All single cards that I have ever seen appear to have been cut from the sheets.”

All of the suites and numbers reflect a traditional deck of playing cards and include a Japanese baseball player or manager. The “Joker” card is designated for the great Babe Ruth. According to Professional Sports Authenticator (PSA), “the Menko Ruth card is one of only a few instances that the New York Yankees legend was pictured on a Japanese-issued card.”

Blogger Andrew Chrisman @sportscardinfo celebrated the JCM 21 set on his site back in 2013 and stated what everyone thinks after viewing the set, “Vintage Menko cards are really fun to look at even if you don’t know who some of the players are.”

I don’t read or speak Japanese, but through the power of the Google Translate app I was able to determine that each suite in the deck of cards represents an individual NPB team. The card suites and corresponding teams are:

Why were these teams selected? What do they have in common? For starters, they are all members of the newly formed Japan Central League. After the 1949 season, the Japanese Baseball League (JBL) reorganized as NPB, a two-league system comprised of the Pacific League and the Central League (modeled after the National and American Leagues in Major League Baseball). Thus, 1950 marked the inaugural season of NPB.

The Players & Positions The Guide lists the individual names on each card, but not the team or position of the player. So again I used Google Translate to confirm the names on the list, cross-referenced them to the 1950 team rosters on StatsCrew.com, and learned what position(s) they played.

And this is where order emerged. I observed that all the King cards were designated for the team manager, and the Ace cards were assigned to pitchers – sometimes the actual pitching ace of the team, other times not. Suspecting a scorebook pattern was unfolding, I confirmed the following card number and position correlations:

Why Babe Ruth and Why this Season? I now knew the names of the four NPB teams, the identities of the 52 individuals and their roles (player, manager, or both – yes, one was a player/manager). I also identified which 16 individuals have been enshrined in the Japan Baseball Hall of Fame (see profiles below), but I still did not have a clear answer as to why only Central League teams were selected, and why Babe Ruth was included.

I suspected that the answer was in the main image on the bottom right of the poster that featured a trophy cup, two baseball bats and victory garland. But the kanji and katakana on the image were two ornate for Google Translate to decipher, so, I “phoned a friend.” A few, actually. 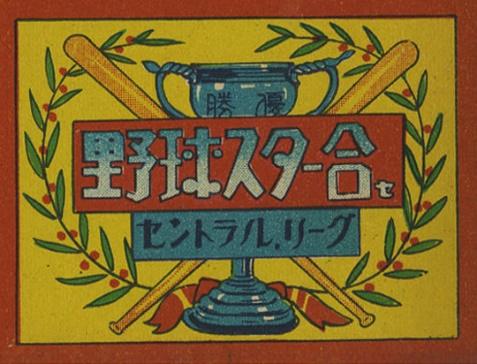 According to Shimako Shimizu, Japanese speaker and translator from Yamaguchi, Japan, whom I’ve worked with on past Japanese baseball translation projects, the graphic on the bottom right of the uncut sheet reads: Champions (on cup); All-Star Game (red background); Central League (green background).

When it comes to translations, it’s always good to get a second opinion. So, I reached out to Kenichi Koshio, friend and native Japanese speaker from Nagoya, Japan, who concluded his translation with the observation, “It could be in an All-Star game and the Central All-Star team won!” Ken shared the rationale that led to his conclusion:

The first line (on cup) 勝優 usually read from left to right, but it goes the other way … right to left. 優勝 > Yuu sho > Victory of the season

The next line (on red) is left to right. 野球スター合セ > Yakyuu sutaa gou se

With two separate translations by native Japanese speakers that point to a Central League victory in an All-Star game, it was time to learn more about NBP All-Star game history.

Early NPB All-Star Game History One might assume that the inaugural NBP season in 1950 included an All-Star game. It did not. Instead, the first official NPB All-Star game was played in 1951. In fact, NPB officials decided to make it an All-Star series comprised of three exhibition games. This was not a best-of-three games series either, otherwise the third game would not have been played, as the Central League won the first two contests. Below are the results:

Who made the cards and when were they distributed?  I asked Engel if he knew who produced the JCM 21 set. “Unfortunately, as is the case with the majority of vintage Japanese sets, the manufacturer is unknown,” he replied.

When were they distributed? “I know that based on the players included in the set, the only year in which all players appearing in the set (other than Babe Ruth) were active was 1950.  Thus, I have listed the set as a 1950 issue,” Engel replied.

He was correct in that the cards do indeed reflect individuals active in 1950, but the peripheral clues now suggest that the set might have been released the following season, sometime after the NPB All-Star Game series.

Also occurring in Japan around the time of the first NPB All-Star game series (July 4-8, 1951) was the build-up to “Babe Ruth Day,” slated for August 16. The date marked the three-year anniversary of the Babe’s death, and the nation of Japan went all-in to honor the Babe.

Both Central League and Pacific League officials reported that they would make “Babe Ruth Day” an annual event, a decision that was congratulated publicly by Japanese Emperor Hirohito.

On the anniversary date itself, memorial ceremonies were held at the three ball parks in Tokyo (homes of the Yomiuri Giants, Daiei Stars and Tokyu Flyers), and a portion of the gate receipts were donated to the Babe Ruth Foundation to help fight cancer.

Conclusion  The evidence strongly suggests that the outcome of the first-ever NPB All-Star Games in 1951 determined which league and teams would be reflected on the JCM 21 set. Furthermore, the national celebration of Babe Ruth Day in 1951 also appears to have been a possible inspiration to include the Babe in the set as well.

Together, these two facts suggest that the JCM 21 Japanese Baseball Set was most likely released sometime around late July/early August 1951. Of course, this is just speculation based on the evidence presented above. I could be wrong.

But one thing is for certain, Engel was correct in that the information on the cards – the NPB players and managers – reflects rosters from the 1950 season.

The tell-tale signs are the inclusion of two individuals with the Shochiku Robins – reserve catcher Kazuo Satake on the Queen of Clubs, and manager Tokuro Konishi on the King of Clubs – who both moved on from that club after the 1950 season.

The Robins won the Central League pennant and earned an appearance in the first-ever Japan Series in 1950.  Unfortunately, they lost to the Mainichi Orions, 4 games to 2, and afterwards both Satake and Konishi moved on to other clubs.

“Chaos is merely order waiting to be deciphered.” The JCM 21 Japanese Baseball Set was once a random collection of Japanese ballplayers to my untrained eye. Now, with the clues decoded, the order appears, and it fosters an even greater appreciation for the factors that went into to making this remarkable work of baseball art.