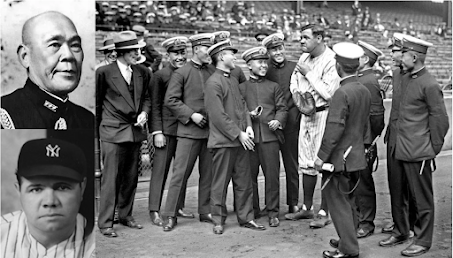 Imagine if during the historic home run race of 1998, a ball hit by slugger Mark McGwire became a prized souvenir of Osama Bin Ladin, the man who three years later orchestrated the devastating attacks on September 11, 2001.

While this 21st-Century scenario didn't occur, the image it creates in your mind gives you a sense of the dynamics that unfolded back in 1927 when Babe Ruth set the single-season record with 60 home runs. The man who met Babe Ruth, asked for his autograph, and became a proud owner of a historic home run souvenir was Japanese Naval Admiral Osami Nagano. Years later Nagano orchestrated the devastating attack of Pearl Harbor on December 7, 1941. Here’s the story of this little known connection between the celebrated Ruth and the infamous Nagano.

The Game
On September 29, 1927, approximately 7,500 fans peppered the seats of Yankee Stadium with the hopes of seeing the great Babe Ruth hit a home run. Babe was sitting on home run number 57 and had his sights set on breaking the record of 59, which he set during the 1921 season.

With a seating capacity of 57,545, roughly 9 out of 10 (87 percent) seats were vacant. It was a day game on a Thursday, so most fans were either at work or school. The sky was partly cloudy, the temperature was a cool 58 degrees by mid-afternoon.

In a game that lasted just short of two hours, the Yankees defeated the Washington Senators, 15-4, behind Babe’s stellar day at the plate. Ruth went 3-for-5 and drove in 6 RBIs, hitting a one-run home run (#58) in the 1st inning, an RBI-triple in the 2nd, and a grand slam (#59) in the 5th inning. (Note: A full summary of the on-field activity is available at the SABR Game Project.)

A report in the Times Union (Brooklyn, NY) published later that day (must have been an early game to make the presses on the same day) describes an interesting and unexpected home run highlight:

“Ruth hit his 58th home run of the season in the first inning. (Horace) Lisenbee was pitching. No one was on base. The ball landed in the right field bleachers. The crowd, including 200 Japanese sailors, guests of the management, went wild as Ruth trotted around the bases.”

This was not the first major league game for the Japanese cadets during their U.S. visit, as they had previously attended a game at Fenway Park in Boston on Friday, September 23. There, they witnessed an extra-innings pitching duel between the Chicago White Sox and Red Sox, The White Sox won 2-1 in 11-innings. Source: The Boston Herald, September 23, 1927, pg. 29.

Japanese Sailors in New York
According to the press, “the Japanese cruisers Asama and Iwate, steamed into New York today (Sept 28) for a nine day visit. Under the command of Rear Admiral Osama Nagano, the two ships, which left Japan on June 30, have made calls at Honolulu, San Francisco, San Pedro, New Orleans, Havana and Boston.

The first event in the elaborate program arranged by civil and naval authorities was an official visit by Rear Admiral Nagano and his staff to Mayor Walker followed by a call at the Brooklyn Navy Yard and another at army headquarters on Governor’s Island… Both cruisers have been training ships of cadets for a number of years.”

The New York Times added, “The midshipmen will see a baseball game at the Yankee Stadium Thursday afternoon.”

Compared to the pitching dual in Boston, this game was far more exciting for the Japanese sailors, as reflected in the New York Times headline the day after the game: 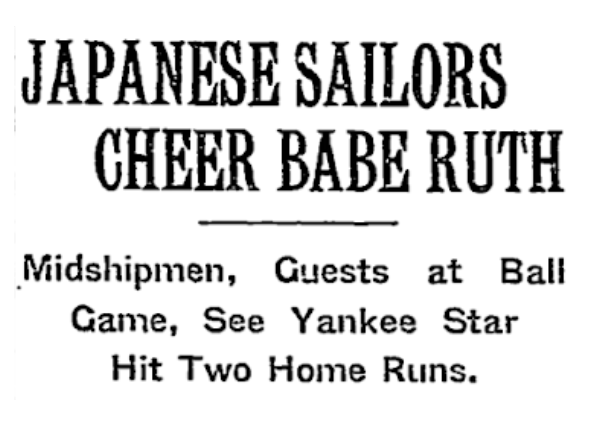 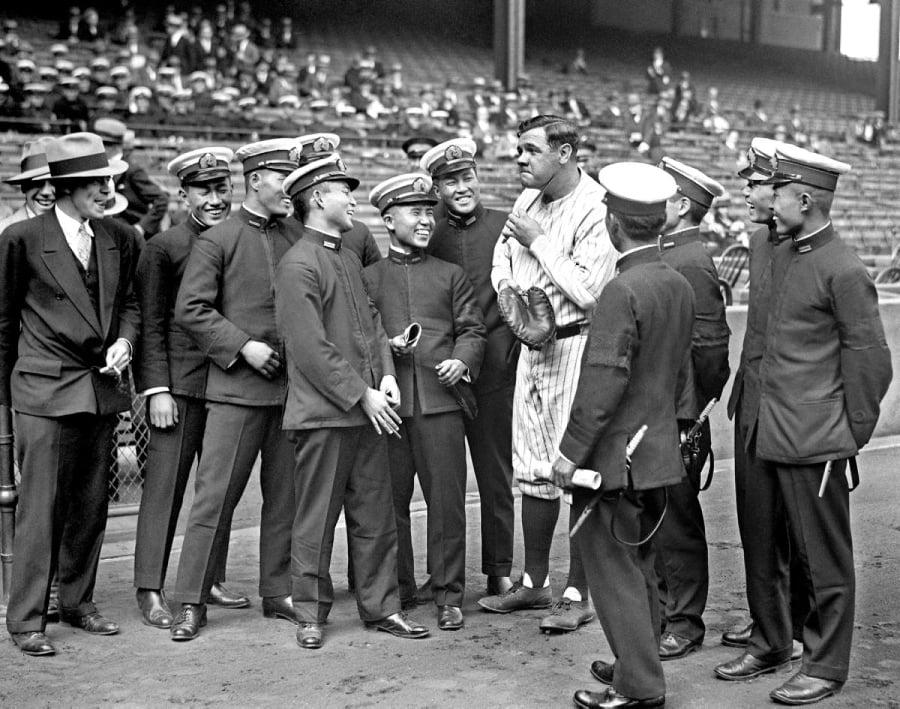 In the above photo credited to “Pacific & Atlantic.” the following caption appeared in the Daily News (New York, NY):

“O, migosh! Babe seems to be attempting facial hari-kari! After witnessing those two glorious homers, Japanese naval officers gathered about him and the playful Babe nearly gave fans heart failure when he took dagger and started shaving himself.”

Ruth would go on to hit home run #60 the following day (September 30), and the Yankees would defeat Washington in the next two days to finish the season with a 110-44 record and clinch the American League pennant.

On October 6, the Japanese sailors departed New York harbor for Annapolis, Maryland. They arrived on October 8, the same day the Yankees won Game Four of the World Series, 4-3, sweeping the Pirates for the championship.

A Home Run Ball
“Guns Boom as Japanese Ships Arrive in Annapolis.” This was the headline in the October 8, 1927, issue of the Baltimore Sun announcing the arrival of the Japanese sailors. Aboard the Iwate and Asama were 650 officers and 183 Imperial Training Squadron students. They attended a Navy football game on Saturday, but the game of baseball and their interaction with Ruth was all they wanted to talk about.

“The subject uppermost in the minds of the Japanese officers, however, was not football – it was baseball. Of all their impressions of America, one officer said, one of the greatest was of the American ‘baseball industry.’

Displays Ball Ruth Hit
Admiral Nagano displayed a ball with Babe Ruth’s signature on it. This ball, Admiral Nagano explained, was given to him by the ‘Swat King’ and was one which Ruth knocked out of the lot in a recent game with Washington.” 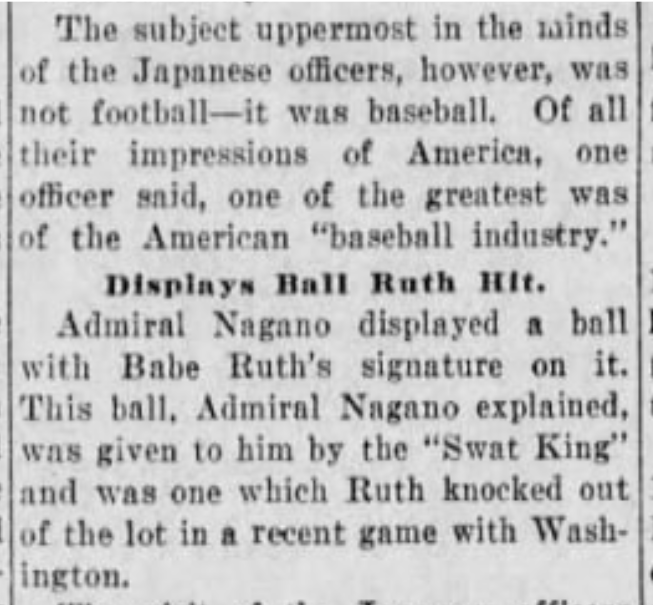 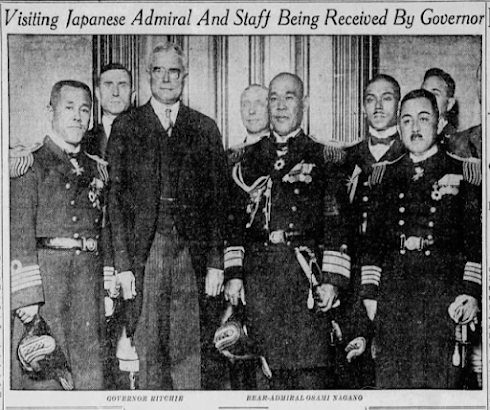 As you recall, Ruth hit two home runs during the game on September 29, so it is unclear if Nagano was the owner of #58 or #59. And it appears that someone must have returned the home run balls to Ruth during the game, for it to be possible for him to give one of the souvenirs to the Admiral. Who knows?

What we do know is that 1927 was not Nagano’s first visit to the U.S. His first visit to the U.S. occurred in 1913. He was a veteran of the Russo-Japanese war (1904) and commanded a warship during the great battle in the Sea of Japan. As a result, in 1913 he represented Japan as a naval attaché in Washington during the disarmament conference and studied at Harvard for a year (1913-1914). Source: The Boston Herald, September 22, 1927, pg. 1.

Years later he told the press that when he was a student at Harvard, he had “an American father and mother,” of the last name Wheeler who lived in Scituate, MA. (Note: The most likely candidates fitting that profile in the 1910 U.S. Census are Clarence G. Wheeler and Sarah A. Wheeler (both age 29) of Scituate, MA.)

During his visit in 1913-14, Nagano was asked by reporters if Japan would take military action against the U.S. in response to the rising Anti-Japanese sentiment reflected in the Anti-Alien Laws of California barring anyone born in Japan from owning land. Nagano stated that the issue was a local matter for California and Japan would not intervene. He then added, “Japan’s relations with America mean so much to both countries that a war would be disastrous.”

Little did he know how prophetic his own words were, and how true they would become, almost three decades later.

Return to Japan
According to F.J. Bradley, author of “He Gave the Order: The Life and Times of Admiral Osami Nagano (Merriam Press, 2015), the Japanese Naval training cruise left Annapolis on October 13 and made seven more stops before completing their 23,818 mile journey. See itinerary below. 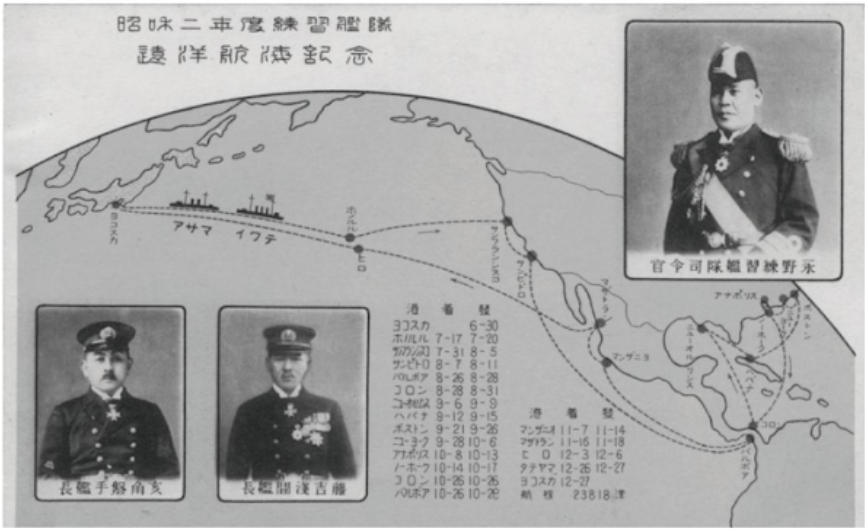 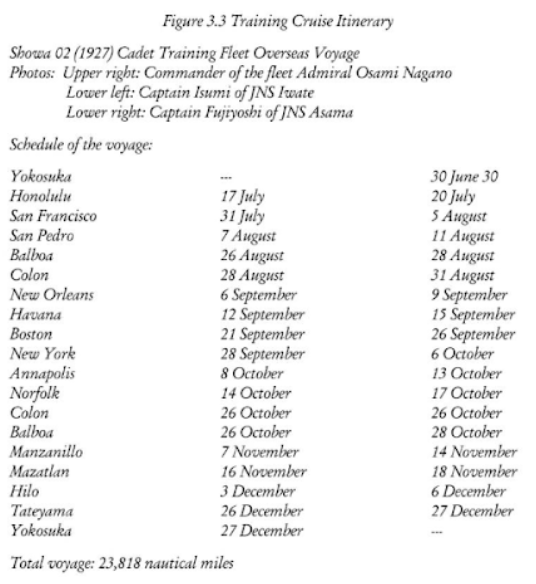 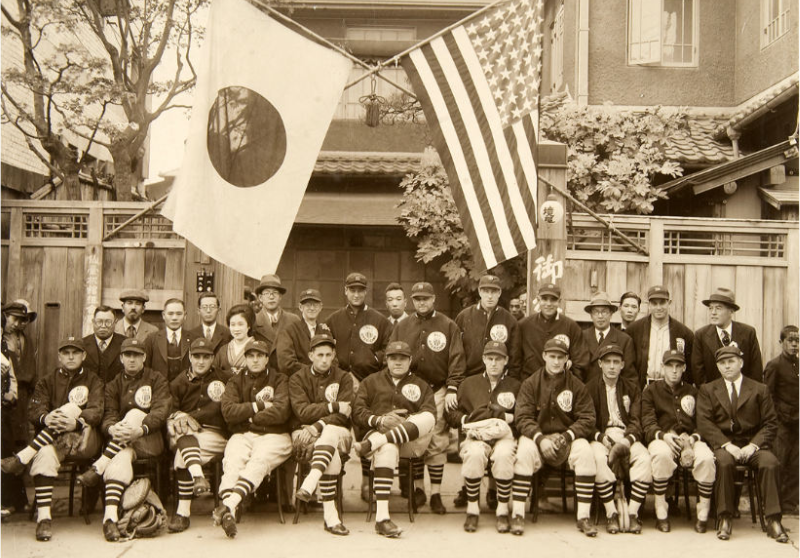 In 1934, Babe Ruth toured Japan as a member of the All-American Goodwill Tour. Three years later, Nagano became commander in chief of the Japanese naval fleet. By April 1941, he was named naval chief of staff where he planned and gave the command to launch the Pearl Harbor attack eight months later.

According to an interview with Julia Ruth, Babe’s daughter, the slugger was so upset after the attack on Pearl Harbor that he threw away all of the gifts he received during his trip to Japan. The feeling was mutual. During WWII, the Japanese soldiers who once celebrated Ruth, shouted his name with obscenities from the dark jungles and fox holes of war.

After the surrender of Japan and the subsequent dropping of the atomic bombs on Hiroshima and Nagasaki by the U.S., Nagano was put on trial by the international military tribunal. There, he assumed full responsibility for the Pearl Harbor attack. 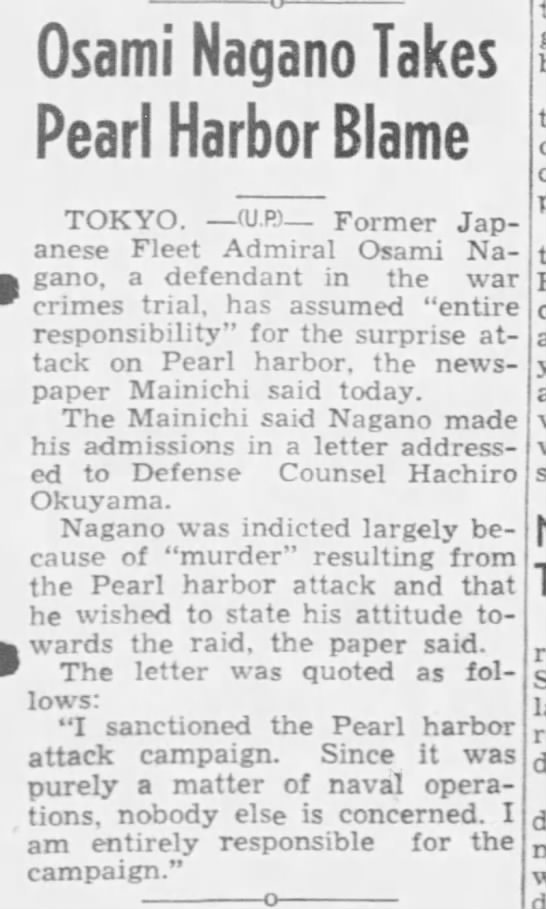 “I sanctioned the Pearl Harbor attack campaign. Since it was purely a matter of naval operations, nobody else is concerned. I am entirely responsible for the campaign.” Source: Ventura County Star (Ventura, CA), Jun 28, 1946, page 1.

By August 1951, Japan was once again in love with the Great Bambino and declared August 16 “Babe Ruth Day” across the country.

There has been no mention of Nagano’s autographed Babe Ruth baseball in the press since the 1927 article in Baltimore – and its whereabouts today are unknown. 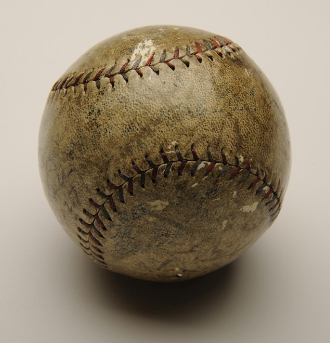 One souvenir from Babe’s record setting season in 1927 -- the 60th home run ball -- is on display at the National Baseball Hall of Fame.

Who was your favorite baseball team when you were a kid? Most likely, it's also the team you watched when you fell in love with the game. 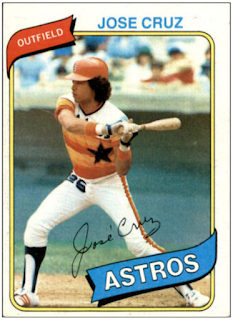 In my formative years I lived in Alief, a suburb of Houston, Texas. So, for me, my favorite team was the 1980 Houston Astros. Despite having some great players -- Nolan Ryan, J.R. Richards, Joe Niekro, Joe Morgan, Jose Cruz, Cesar Cedeno and Terry Puhl -- they missed the World Series by one game (losing to Pete Rose and his Philadelphia Phillies in arguably one of the most exciting National League playoff series).

Cruz was my favorite player, and I've always appreciated the fact that he and his teammates, Cedeno and Puhl, were an All-International outfield -- Cruz from Puerto Rico, Cedeno from the Dominican Republic, and Puhl from Canada.

In the memory of my youth, I've always thought that those three players made up one of the best outfields in MLB history. And as I got older, I wondered where they ranked in MLB history. So I asked:

... which MLB teams had the greatest trio of outfielders of all time?

In my mind, the greatest outfield trio would have an all-star caliber player (or higher) in all three positions -- left, center and right field. And they had to play together for the majority of the season.

We didn't have sabermetrics back in 1980, but we do today. So, I turned to several trusted baseball stats websites to answer my question.

I started with Wins Above Replacement (WAR). According to MLB.com, "WAR measures a player's value in all facets of the game by deciphering how many more wins he's worth than a replacement-level player at his same position."

According to Fangraph.com, the caliber of a position players is determined by the following WAR levels:

Next, Baseball-Reference.com enabled me to search for teams where all three outfielders met the following criteria:
The search results revealed that only 21 teams in MLB history consistently fielded all-star caliber outfielder for a full season. These teams and players, ranked by combined WAR, are:
Click here to view the full list and the stats for individual players.
And now, to give some love to the Greatest outfield trio of all time (the 1963 S.F. Giants) and my Favorite trio of all time (the 1980 Houston Astros). 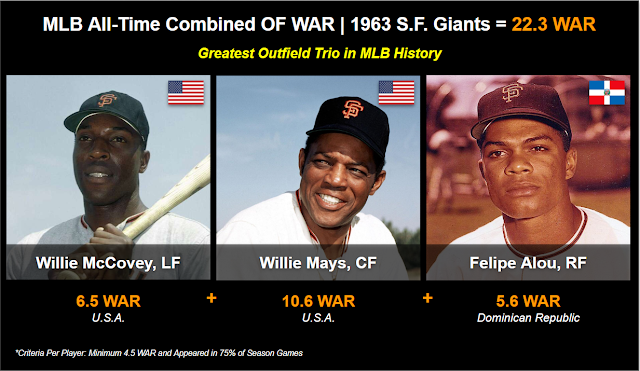 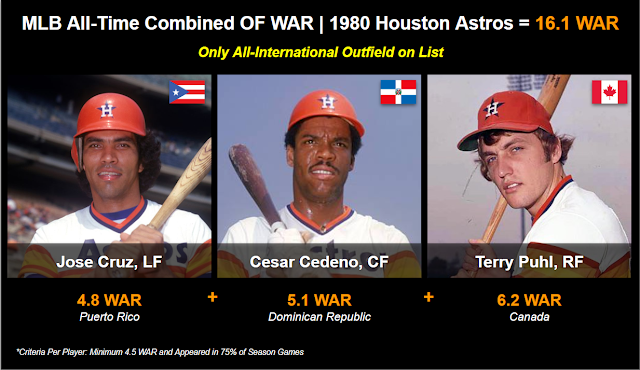 And here's some interesting things I observed about the 21 teams on the list:
A special thanks to Adam Darowski @baseballtwit with Baseball-Reference.com who offered his expertise on how to conduct more complex searches on the site (and his expertise on Rickey Henderson).
And if you think the criteria for the greatest outfield trio should be adjusted (i.e. change the minimum WAR or the percent of games played) here's the link to the search criteria. (Note: hit the blue "Show Criteria" button).
Enjoy -- and let the bar room and social media debates begin. ;-)
##
Additional Context: To give a sense of how rare it is for someone to achieve a 4.5 WAR and play in 75% of the teams games in the OF, so far during the 2022 Season only a handful of players across the entire league meet that criteria. They are:
1    Mike Trout (LAA)
2    Michael Harris (ATL)
3    Kyle Tucker (HOU)
4    Mookie Betts (LAD)
5    Julio Rodríguez (SEA)
at September 03, 2022
Newer Posts Older Posts Home
Subscribe to: Posts (Atom)