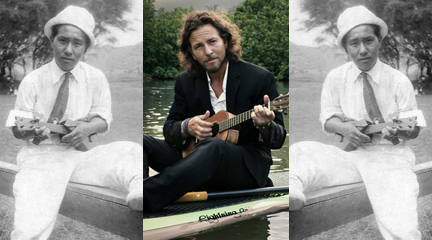 How to End a Slump: Pete Rose's Advice for Ichiro

Back in 2002 I met Pete Rose at a baseball fantasy camp and there he shared his advice on how to get out of a slump.

I wonder if Ichiro has ever heard these tips from Pete? Here it is.

Pete says: Don't over think it. Don't over adjust. Don't change your stance or your overall approach.

Just do one of six things:

Do any of these six things and eventually the ball will get through for a hit, and you'll get back into your groove as a hitter.

Ichiro and the rest of us can take or leave Pete's advice.

Zenimura, “Father of Japanese American Baseball”, competed with Babe Ruth, Lou Gehrig, Joe DiMaggio and other Hall of Famers from the Negro Leagues and Japan

Written by baseball historian and author Bill Staples, Jr., and featuring a foreword by current Toronto Blue Jays bench coach Don Wakamatsu, the first Asian-American manager in major league history, the new biography delivers a thorough and fascinating account of Kenichi Zenimura (1900-1968), the man recognized by historians as the “Father of Japanese-American Baseball.”

While Jackie Robinson and the Negro Leagues have been well documented, few baseball fans know about the Japanese American Nisei Leagues, or of their most influential figure, Zenimura. A phenomenal player who excelled at all nine positions, “Zeni” possessed a gift for using the game to transcend the ignorance and intolerance of his era.

As a player, captain, and manager, he worked tirelessly to export the American style of play in Japan, leading several goodwill trips to Asia and helping to negotiate tours of Japan by Negro League all-stars and Babe Ruth. One of the most fascinating chapters of Zenimura’s career occurred when he established a 32-team league behind the barbed wire of Arizona’s Gila River Internment Camp during World War II.

In anticipation of the Arizona centennial in 2012, the new Zenimura biography has been named an official Arizona Centennial Legacy Project by the Arizona Historical Advisory Commission (AHAC). The award recognizes the internment of Japanese Americans and Zeni’s efforts during WWII as one of the most significant events of Arizona history in the past 100 years.

The Zenimura bio was funded in part by a grant from the Society of American Baseball Research (SABR) and also supported by numerous organizations during the three-year research phase for the effort, including the Nisei Baseball Research Project, the Negro Leagues Baseball Museum, the National Baseball Hall of Fame, the Baseball Reliquary, the Japanese American Citizens League (JACL), the Japanese American National Museum, the Gila River Indian Community, and the Asian Pacific American Studies department at Arizona State University.

“Initially I was drawn to Zenimura’s story because of the parallels between Pearl Harbor and the terrorist attacks of 9/11, and attitudes towards those who look like the enemy,” said author Bill Staples. “In the end though I discovered that the story of Zenimura is about more than just a great baseball man, his life serves as an example of how it’s possible to achieve happiness and freedom in a world that is less happy and free.”

Staples added, “the story of Zenimura is more than just about 20th-century Japanese American baseball, it’s about the timeless and shared human condition. Anyone who’s had to overcome huge obstacles to achieve a dream or goal will relate to his story.”

• Bill Staples, Jr. is a dedicated baseball historian, author and a meticulous researcher who utilizes twenty-first century technology to root out the most obscure facts about his subjects. His work on Kenichi Zenimura is a groundbreaking effort. – William F. McNeil, baseball historian, author, Sporting News-SABR Research Award Winner (2007), Five-time recipient of the Robert Peterson Award

• Staples’ tireless research and love for the game has resulted in "Kenichi Zenimura, Japanese American Baseball Pioneer,” one of the great untold stories of our American pastime and an essential for any baseball faithful. – Kerry Yo Nakagawa, historian, author, filmmaker, founder/director of the Nisei Baseball Research Project

• Hopefully (this book) helps transform a long-neglected chapter of baseball history – Nisei baseball history – into a well-chronicled saga for all fans of all races, creeds and colors to appreciate. – Don Wakamatsu, First Asian-American Manager in MLB History

About the Author
Bill Staples, Jr. is a member of the Society for American Baseball Research (SABR) in Arizona with a passion for researching and telling the untold stories of the national pastime. His areas of expertise include Japanese American and Negro Leagues baseball history as a context for exploring the themes of civil rights, cross-cultural relations and globalization.

He is a board member of the Nisei Baseball Research Project (niseibaseball.com), chair of the SABR Asian Baseball Committee, research contributor to the Negro Leagues Baseball Museum in Kansas City, past speaker at the Cooperstown Symposium on Baseball and American Culture at the National Baseball Hall of Fame, and two-time presenter at the Arizona SABR Annual Spring Training convention (2007, 2009)

Staples holds an BA from the University of North Texas and an MBA from Arizona State University.

About McFarland
McFarland is a leading independent publisher of academic and nonfiction books. McFarland is especially known for covering topics of popular appeal in a serious and scholarly fashion, and for going to great lengths to manufacture their books to the highest standards and library specifications. Learn more at: http://www.mcfarlandpub.com.
at July 05, 2011
Newer Posts Older Posts Home
Subscribe to: Posts (Atom)