On Saturday, January 21, 2017, the City of Chandler dedicated a history kiosk in a park near the site of a World War II internment camp for Japanese Americans. The dedication ceremony included city officials and former internees. 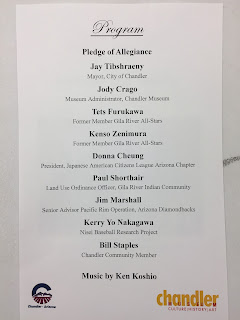 Display panels on the kiosk (PDF, 5MB) tell the Gila River War Relocation Center's history, including how baseball provided residents "a sense of pride, hope and normalcy during their incarceration."


The kiosk project was partly funded by a grant from the U.S. Department of the Interior, the National Park Service and the Japanese American Confinement Sites Grant Program.The dedication ceremony was recorded and posted on YouTube.

Afterwards, the Nozomi Park dedication ceremony and kiosk was also featured in local and international media: