Click here to read the Introduction and Preface to the new Kenichi Zenimura bio, compliments of our publisher McFarland & Co.
at September 18, 2011

9/11 Reflections: Baseball, Buddhism and How to Be Happy and Free

If it were not for the terrorist attacks of 9/11 the book “Kenichi Zenimura, Japanese American Baseball Pioneer” would not have been written. The book was my emotional and intellectual response to the tragic events of that day, and the impact it had on the world afterward.
I’ve been a baseball fan since 1980 and had never heard of Kenichi Zenimura, the Nisei Leagues (very similar to the Negro Leagues), or even WWII Japanese American incarceration camp baseball prior to my serendipitous Google search of “Gila River” and “baseball” in late 2004. 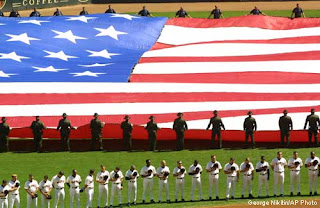 And I suspect that under ordinary circumstances (in a pre- 9/11 world) I would have glossed over the topic of JA incarceration baseball saying to myself “wow, that’s fascinating,” and moved on to other things.
But because of the obvious parallels between 9/11 attacks in 2001 and the bombing of Pearl Harbor in 1941, I was compelled to dive deeper and learn more, specifically to explore how our country (the U.S.) responded to those innocent individuals who just so happen to “look like the enemy.”
Generally speaking, it appears that as a country we did learn the lessons of WWII. We didn’t have incarceration camps for Arab Americans after 9/11. But no doubt though that the fear, prejudice, and racism manifested itself in different, more subtle -- and not so subtle -- ways, i.e. random hate crimes and killings, racial profiling, the Patriot Act, etc.
As I dove deeper into U.S. history before and during WWII, I developed a greater understanding of the socio-economic factors that led to JA incarceration. And at the same time, I began to see some not-so-obvious parallels between the post-Pearl Harbor hysteria and our collective behavior after 9/11.
For example, the story resonates on a deeper, more psychological level. As a result of things like the Patriot Act, increased security, the fear to openly travel the world, fear that we might be attacked at home by terrorists at any moment, we, in essence, collectively incarcerated ourselves. Not physical incarceration, but a psychological one, surrounding ourselves with invisible fences and barbed wire -- constructed of fear and paranoia.
And now seeing that we as an entire nation, perhaps even the entire world, were psychologically incarcerated, I asked myself if there were any lessons to be learned, wisdom to be gained, from the Japanese Americans who were incarcerated during WWII.  And so I dove even deeper…
Lessons Learned
“How does one achieve happiness and freedom in a world that is less happy and free?” This is the magic question for us in a post 9/11 world, and from my perspective, the answer can be found in the story of Japanese American incarceration during WWII.
As I’ve said many times before, it is more than just about the Japanese American experience; it is about the timeless and universal human condition. It is the story of us all.
The Buddhist wisdom that I take away from the Japanese American incarceration is “the three answers.” I first came across this lesson in a Zen parable shared by Les Kaye, a former IBM executive who is now a Buddhist teacher in Northern California. Kaye had put a Buddhist spin on Leo Tolstoy’s classic parable titled “The Three Questions.” The three questions are:
·         When is the best time to do something?
·         Who is the most important person?
·         What is the most important thing to do?
In Kaye’s version of the story, the King who asks these questions goes on a journey and unknowingly encounters an assassin who is out to kill him. Through a series of twists and turns, the king ends up saving the life of his would-be-assassin. In the end, the king discovers the answers to his questions:
·         The present moment is the best time to do something;
·         The person you are with is the most important person; and
·         Making the person you are with happy is the most important thing you can do.
Applying this story to Kenichi Zenimura (and his Japanese American peers), we see:

The present moment: At first Zenimura hated being in Arizona, Gila River, and the incarceration camp. But he had no choice and he had no idea how long he was going to be there … would it be a year, 3 years, 10 years? The only thing he could control was the here and the now. And he learned to make the best of it.
The person you are with: Zeni would have preferred to be in Arkansas with his Fresno peers (most Japanese Americans from Fresno were sent to AR, but due to his wife’s tuberculosis, Zenimura and his family were sent to the dry weather of AZ) , or better yet, back in California with his community. But he wasn’t, so he turned his attention to his surrounding community.
Making the other happy:  Zenimura did what he knew best … he built a baseball field and founded a league. Baseball created a sense of normalcy, community, and hope for those incarcerated at Gila River. It helped minimize their suffering.
And in the incarceration camps, this exchange occurred in areas other than Zenimura and baseball. There were people with a wide variety of skills and passions who shared them with others, such as music, art, gardening, science, basketball, football, golf, etc.
The take-away: be fully present every day, appreciate and value the people you are with (which also means NOT dwelling on those who are absent), and fully share your passions with the other to bring happiness into their lives. Do this, and you can find joy, freedom, and a sense of fulfillment anywhere, anytime.
It’s so simple, it’s genius. Yet, unfortunately, it’s so hard to do.
“When you lose, don’t lose the lesson.” FOR ME, the lessons of 9/11/01 (and 12/7/41) are this:
Armed with the wisdom above, we can endure any situation: like being unjustly incarcerated by your own country; or being attacked by terrorists and paralyzed by fear; or surviving the loss of a loved one.