For those who don’t know, the word “yakyu” is Japanese for baseball.

And for most baseball fans in the U.S., the start of a new season begins when pitchers and catchers report to spring training in mid-February.

But since 2016, baseball in Arizona has kicked off with the presence of the Hokkaido Nippon Ham Fighters two weeks prior. The Fighters typically arrive from Japan at the beginning of February for their spring training. About 10 days later, they begin exhibition games against visiting teams from Korea. Think about it: Asian baseball, Japan vs. Korea, being played in the middle of the Arizona desert.

I attended the first Fighters' games in Arizona back in 2016 when they played in Peoria, AZ. My understanding it that it was the first of their five-year agreement to play in Arizona. I missed the games in 2017, but returned again in 2018 when I heard they moved their training to Scottsdale.

On Sat, Feb 10, 2018, I attended the game between the Fighters and the KT Wiz, a relatively new team from Suwon, South Korea. The game was played at Salt River Fields at Talking Stick, the shared spring training home of the Arizona Diamondbacks and Colorado Rockies. I really enjoyed the game experience, and I highly recommend it to anyone who loves the game of baseball, and/or loves learning about other cultures. 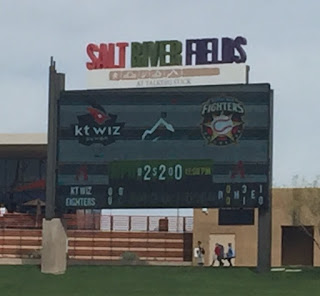 When I attended the game back in 2016 I diligently watched the game and kept score the entire game. I sat in the same seat and didn’t miss a pitch. In 2018, I tried a different approach. I put away the score book and turned my attention to the surrounding environment. I moved around the entire game. Each inning was a new point of view, a new experience. I took in the game from the first base side, visiting team bullpen, home team bullpen, third base side, and then behind home plate.

As Yogi Berra once said, “You can observe a lot just by watching.” So I wanted to share some of my observations from the 2018 Nippon Ham Fighters spring training experience in Arizona. So if you are in Arizona in February 2019 and 2020, the following are nine fun-facts and possibly reasons why you should come out to the ballpark and experience some Cactus League Yakyu.

#9. The price – FREE. You can’t beat that. Between 2016 and 2018, they have not charged to attend the games. (That might change in the future, not sure). They are exhibition games, but they have the same feel and professional approach as an MLB spring training game.

#8. Attendance – The first year attendance was probably close to 100 fans. This past game attendance skyrocketed to a whopping 250 people. It is an intimate gathering of fans from Japan, Korea, the U.S., and probably some geographic locations in between. Because the crowd is so small, you can overhear multiple languages being spoken, on the field and in the stands. And because there are plenty of seats to choose from, you can easily move around during the game. Plus, there’s not much competition for foul balls. And these just aren’t any foul balls … 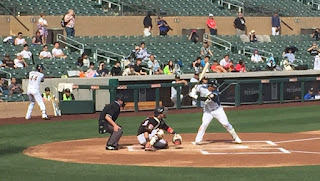 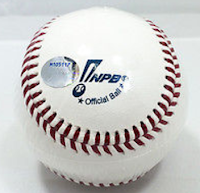 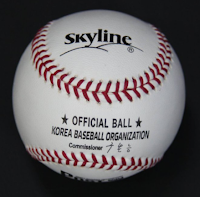 #6. The uniforms – Unlike the MLB, uniforms in Japan and Korea are covered with sponsors’ logos, much like NASCAR and soccer. In fact, the Fighters are sponsored by a company called Nippon Ham … so when you hear the name Nippon-Ham Fighters, keep in mind that they are not a team of guys who fight ham. The KT Wiz donned impressive black uniforms with a logo that looked like something from a Transformers movie. And finally, some jerseys contained triple-digit numbers, i.e. over #100. I had never seen this before, and after doing a little research I learned that the Fighters have retired jersey #100 in honor of the late Yoshinori Ohkoso (1915-2005), team owner, founder the Nippon Meat Packers company, and now a member of the Japanese Baseball Hall of Fame. 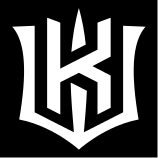 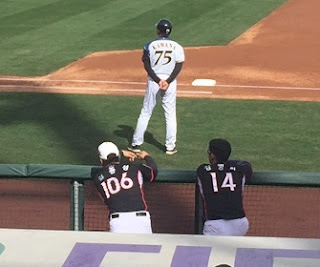 #5. The bullpen – Because it’s an exhibition game, the teams try to use as many pitchers as possible. So this means there’s activity in the bullpen every inning. Salt River Field is structured in a way that allows fans to get close to the bullpen action. Standing close by you can: watch the pitchers go through their warm up routines, hear the pitchers and catchers work through their pitch selection, and hear the coaches offer advice to fine tune a pitcher’s delivery. I was especially impressed to see the catchers line up their gloves on the outside corners of the plate and the pitchers consistently hit their spots with precision. These guys are good. And they should be, they’re professionals. 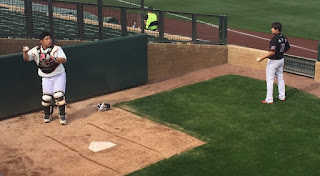 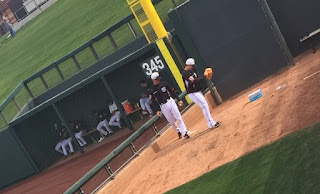 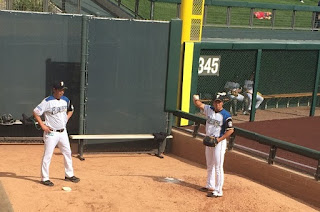 #4. The umpires – The home plate umpire for this particular game was from Japan. He had a commanding presence, but he was also entertaining. Players from both teams would respectfully bow towards the umpire before stepping into the batters’ box. And if a player got called out watching a third strike for the final out, the umpire would turn to his right, emphatically punch the sky, and yell something that – regardless of which language you spoke – clearly conveyed that the inning was over. The only one not smiling after that was the batter returning to the bench. 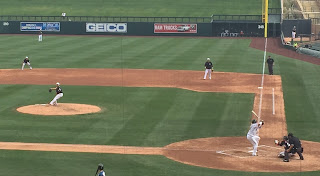 #3. The crowd – If you like to people watch, this is the place for you. In addition to the Arizona locals, you will encounter baseball fans and families from Japan and Korea, international media (carrying very large cameras), coaches and executives for both teams, and a spattering of MLB scouts searching for that next big star from Asia. My favorite and most fascinating fan observation occurred during the seventh-inning stretch. When the PA system played “Take me out to the ball game,” I could only hear the few English-speaking fans singing out loud. Which makes sense … perhaps this is a custom unique to baseball in the West. But right after that song, the stadium played “Take on me”, the 1985 classic by the Norwegian band a-ha. The majority of the crowd – regardless of their native language – knew the main chorus and sang out loud. Cool stuff. 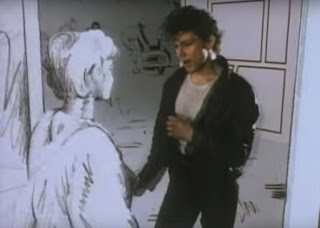 2. The next big star – For the last two spring training seasons, fans in Arizona had the good fortune of watching Japanese sensation Shohei Ohtani perform up close. (On a side note, I do wonder if his familiarity with the Cactus League influenced his decision to sign with an MLB team that trains in Arizona. His new team, the Angels, train in Tempe, AZ.) This year a lot of attention was given to rookie outfielder and No. 1 draft pick Kotaro Kiyomiya. (Note: “Kiyomiya was the most sought-after player … after hitting 111 home runs as a high school player — a total touted as an unofficial Japan record.”) After observing the game and players during my afternoon at the ballpark, one player stood out to me just on presence alone – pitcher Kenta Uehara. He is a strong looking 23 year-old left-hander who was the Fighters’ No. 1 pick in 2015. The career stats of this Meiji University grad suggest that he is still finding himself as a professional, but in this game he performed well. He retired all three batters he faced – two ground balls to the shortstop and a strike out to end the inning. On the mound, he raises his hands above his head during his wind up, which is reminiscent of the legendary Hideo Nomo. Off the mound, physically he favors Yu Darvish, and has a cool, Hollywood style that reminds me of Ichiro when he first joined the Mariners back in 2001. I’m not sure if Kenta Uehara will ever be a MLB all-star, but I sense that he has the potential to have “star power” and become a fan favorite here in the U.S. 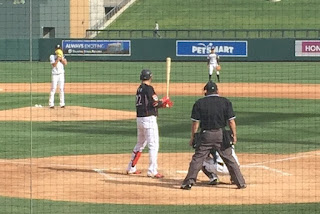 #1. The game – No one really cares about the score of an exhibition game. I was contemplating leaving early when the game was tied 1-1 around the fifth inning. But then things started to get interesting, so I stayed. And I’m glad I did. The KT Wiz had taken a 2-1 lead. The Fighters were at bat, and with the tying run on second base, the batter (who I’m not 100% certain who it was because I wasn’t keeping score … possibly it was #58 Toshitake Yokoo), drove a line drive to center field to tie the game. Around the seventh inning the Fighters blew open the game with a home run. The score was 5-2 going into the ninth inning. Everyone in the crowd though the game was three outs from ending if the KT Wiz failed to tie the game. Three up, three down. We all thought the game was over, but to our surprise, even with a 5-2 lead in the bottom of the ninth, the Fighters finished out the game and took their at bats.

It was bonus baseball for the fans, and the players for both teams got in extra reps in a game-like situation.
**
After the game both managers met at home plate and respectfully bowed towards one another. And fans gathered by the third-base dugout with hopes of getting an autograph or two from the ballplayers.

All in all it was a great experience. Not everyone can travel to Japan or Korea to see a professional baseball game. This might be the next best thing … Japanese and Korean professional baseball visiting Arizona during the month of February and competing in a beautiful Cactus League ballpark.

The Nippon Ham Fighters are scheduled to return for spring training in 2019 and 2020. If you are in Arizona (or even the West Coast) at that time, I highly encourage you to go out to the ballpark and take advantage of this wonderful, international baseball experience.