“Did the Twin Towers fall when the Japanese bombed Pearl Harbor?”

“Did the Twin Towers fall when the Japanese bombed Pearl Harbor?” A second grader asked me this question during the Q&A portion of my presentation this past week. You gotta love the mind of an eight-year old. In honor of Asian Pacific American Heritage Month (May) I was invited to speak to their entire second-grade class at my daughter’s school about “Japanese American Baseball in Arizona”. 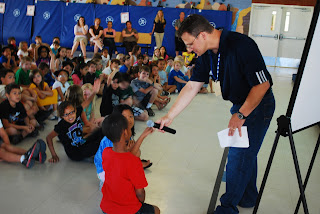 The topic is relevant for many reasons, especially because the school is located about 15 miles from the Japanese American Internment Camp at Gila River (AZ). Gila River is where approximately 13,000 people of Japanese ancestry were unjustly incarcerated during WWII. The most famous Gila River internee was Japanese American baseball pioneer, Kenichi Zenimura. Leading up to the presentation the teachers shared two books with their students: “Baseball Saved Us,” by Ken Machizuki, and “Teammates” by Peter Golenbock. Sharon Robinson, Jackie’s daughter, once said “there are numerous parallels between my father’s story and that of Japanese Americans.” These two books are great primers to get eight-year olds starting to think about the complexities and attitudes that led to both the segregation of African-Americans and the internment of Japanese American during WWII. I closed the presentation with an interactive session on Jackie’s nine values that helped him – and Japanese Americans – overcome the tough times in their lives. The nine values are: courage, determination, teamwork, persistence, integrity, citizenship, justice, commitment, and excellence.

And finally, here’s some of the highlights from the Q&A session:

Q: “Will Kenichi Zenimura be joining us today?”
A: Unfortunately he will not. He died in 1968.

Q: “Who are some great ball players that we should know about?”
A: Great question. My three favorites are Satchel Paige, Negro League pitcher who didn’t get a chance to pitch in the majors until he was 42; Josh Gibson, Negro Leaguer and perhaps one of the greatest hitters of all time; and of course, Kenichi Zenimura.

Q: “Did the Twin Towers fall when the Japanese bombed Pearl Harbor?”
A: Wow, great question. Those are actually two different events, but they do have something in common. The bombing of Pearl Harbor occurred in 1941, and the terrorist attacks of 9/11 occurred in 2001 … 70 years apart. Here’s what they have in common: After 9/11 there was a concern that because the terrorists behind the attacks were Muslims, that all Muslims in our country would face discrimination because they “looked like the enemy,” just like what happen to Japanese-Americans during WWII. Overall I think our country learned from our mistakes ... Arab-Americans were not sent to internment camps. But still, it’s not perfect and unfortunately there are some ignorant people in our country who still think that all Muslims are terrorists. And that’s wrong. 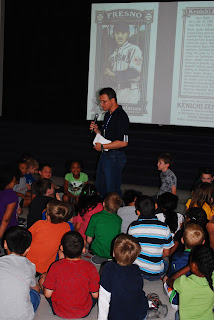 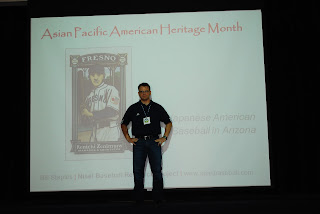