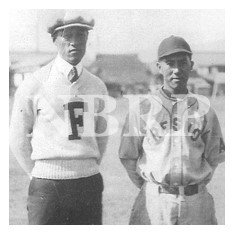 For those with an interest in Japanese American baseball history, Takizo Matsumoto is a noteworthy and fascinating selection.

Matsumoto was born in Japan but moved to the U.S. as a toddler and was raised in Fresno, CA. There he changed his name to "Frank" and went by the last name "Narushima" after his mother remarried. Frank Narushima was a multi-sport athlete at Fresno High School who excelled at both baseball, football and track. In 1919 he co-founded the Fresno Athletic Club, which would later become one of the most successful Nikkei teams on the west coast. In 1920, Kenichi Zenimura moved from Hawaii to Fresno, and there he and Narushima/Matsumoto developed a life-long friendship and, mutually-beneficial relationship that would help each other operate as successful ambassadors between the U.S. and Japan.

Back in 2007 the Nisei Baseball Research Project submitted a proposal to the Japanese Baseball Hall of Fame nominating Kenichi Zenimura for enshrinement. In that proposal the NBRP not only focused on Zenimura's accomplishments, it highlighted the importance of Narushima/Matsumoto as well. The recent addition of Matsumoto to the Japanese Baseball Hall of Fame is a great honor for this important and overlooked figure in U.S.-Japan baseball history.  Matsumoto's enshrinement is a sign of hope that his counterpart in the U.S., Kenichi Zenimura, who also served quietly behind the scenes as an ambassador between two baseball-loving nations, will someday receive the same honor.

Below is a timeline of Matsumoto and Zenimura's lives, highlighting their individual paths and intersecting collaboration. In addition to sources from Kerry Yo Nakagawa with the NBRP, Professor Kyoko Yoshida of Keio University contributed research to the timeline as well (see KY NOTE).

1901
Takizo Matsumoto born in .  When he was a toddler his family moved to and shortly after their arrival Matusmoto’s father passed away. His widowed mother, Kiyo Matsumoto, remarried restaurant owner Hichiza Narushima, a man 14 years her senior.[1] Afterwards, young Takizo took on both an American first name and his step-father’s surname to become Frank Narushima.

1916-1919
In , Zenimura became a diminutive (five feet tall, 105 lbs) star infielder and catcher with the champion squad and the semi-pro Honolulu Asahi.

In the states, Narushima became a star athlete at , excelling in football (halfback and end), baseball (outfielder) and track (sprinter).

1920
In April 1920 Zenimura moved to the and joined the F.A.C. He was originally on his way to play ball in when his cousin Katsuo “Jimmy” Hirokawa, also an F.A.C. team member, encouraged him to stay in with the team.

Narushima and Zenimura are F.A.C. teammates for the 1920 season.

1921-22
Narushima attends the California Institute of Technology for two years.

Zenimura travels back to to coach the baseball team. On this squad is his cousin, Tatsumi Zenimura. After one season, Zeni returns to the states.

(KY NOTE: Narushima entered of when 22. Joined their baseball
club. His club mates include Tatsumi Zenimura.)

Narushima decides to move back to to learn how to speak his native tongue with plans on returning to the in two years.  His plans change.  At the end of two years (1924) he becomes proficient enough in Japanese and enters . Once established in , he changes his name back to Matsumoto.

1923
While in returning from , Zenimura forms the All-Hawaiian All-Stars and barnstorms the He encourages several members of the team to stay in and join the F.A.C.

1925
Nisei club San Jose Asahi, led by team captain Russ Hinaga, tours . Upon their return player “Duke” Sera extends an offer on behalf of of $15,000 to Babe Ruth to tour .

1927
Zenimura and the F.A.C. tour for the second time; joining them is the Philadelphia Royal Giants (PRG), an all-star Negro League squad led by Biz Mackey and Andy Cooper. Zenimura’s business relationship with PRG manager Lon Goodwin dates back to 1925. 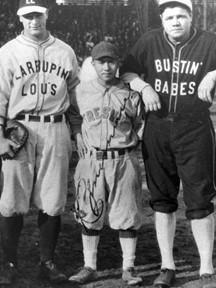 1927
Zenimura plays in exhibition game with Ruth and Gehrig in on October 29 (PHOTO)
1929
Narushima and Meiji come to the for tour; while in , Meiji and F.A.C. combine squads and take on to defeat a local semi-pro team.  This appears to be the first-ever Nisei and combo lineup.[2] (PHOTO: Matsumoto /Narushima front row, far left, in hat.) 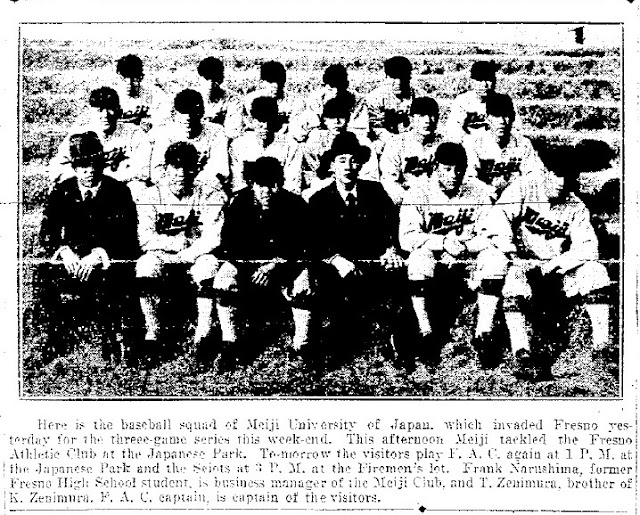 (KY NOTE: At Meiji, he was a "manager," but this in Japanese means a student assistant to coaches and the real manager. It sounds that he wasn't a player but kept involved with the sports throughout. In 1929,  the Meiji team toured around the world.)

1930
Matsumoto graduates from Meiji and joins the faculty teaching English and economics.

1931
MLB Tour, Gehrig to ; no record of Matsumoto’s involvement of this tour, however later articles (see 1947) suggests he might have played a role as a translator for the visiting squad.

(KY NOTE: When O'Doul came in 1931, he (Matsumoto) was the translator. Moe Berg encouraged and helped him to go study at Harvard's business school in 1937. When he was back, he became a professor (later a board member) of )

Kenso “Howard” Zenimura, son of Kenichi, verifies that Frank was one of his father’s key contacts in (the other being Nobuo Fujita, Big Six University pioneer). Kenso said, “Any time my dad went to , or Narushima came to the , the two of them would always get together.”[4]

The Philadelphia Royal Giants make a second tour to ; Mackey, Cooper and manager Goodwin return. Japanese historian Kazuo Sayama credits the ’27 and ’32 tours as important inspiration for the start of professional baseball in .

1934
Matsumoto gains the distinction of being the first person to introduce American football to . On Thanksgiving 1934, a crowd of 36,000 people saw their first gridiron game in between a team from the universities and a team of American and British players from the Yokohoma Athletic Club. [5] 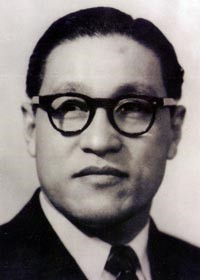 MLB Tour, Ruth and Gehrig to ; photos feature Matsumoto and Gehrig together in playful poses as though they are familiar friends (suggesting Matsumoto might have had a role in the ’31 Tour). (PHOTOS below) 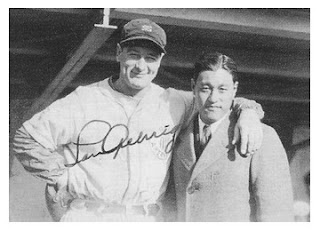 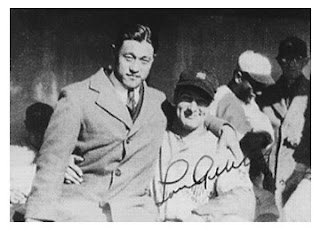 1935
Newspaper publisher Matsutaro Shoriki is stabbed by a fanatic member of the “Warlike Gods Society” for being disloyal to by sponsoring Ruth’s recent barnstorming tour.[6]

1936
Matsumoto is named the leader of the Japanese Olympic Games Committee in preparation for the 1940 games in . He traveled to (site of the 1936 games) and (1932 games) to study the operations of the games.

Matsumoto is named president of the World’s International Baseball Federation, comprised of 16 nations and . Other board members include Steere Noda, founder of the Honolulu Asahi. “Leslie Mann of accepted invitation to his team to next summer (1937). Similar invitations will be extended to the Hawaiians for a Japanese-American-Hawaiian series. Many nations are planning to send teams to the sports carnival in 1938.” [7]

1937
Zenimura makes his third and final goodwill tour to . He returns inspired by the promise of the 1940 Olympic Games and begins making plans for a return trip to . He books sixty rooms in a hotel and plans on bringing a team (or teams) back to tour in 1940. [8]

1938
Matsumoto receives his MBA from Harvard.

(KY Note: Moe Berg encouraged and helped him to go study at Harvard's business school in 1937.)

1939
Matsumoto is being groomed for the next Japanese ambassador to the when the war developed.[9]

Escalating war between and cancels 1940 Olympics in .

1946
Matsumoto becomes representative to the diet from the Hiroshima District.

(KY NOTE: After the war, he represented . In fifties, he played important diplomatic roles in a few cabinets (1952, 54, 57). It sounds that he had some conflicts with the top figures of the Japanese professional baseball. He was instrumental in resuming baseball games in along with Cappy Harada.)

1947
As a member of the House of Representatives, Matsumoto pitched a few innings against the House of Councilors in . The House wins, 22 to 3.  The article also states: “… the former Fresnan (Matsumoto) was a close friend of Lefty O’Doul, San Francisco Seal manager; Connie Mack, manager of the Philadelphia Athletics, and the later Lou Gehrig. He served as interpreter for American baseball teams on tour of .”

1953
Zenimura negotiates contracts for his two sons Kenso and Kenshi to play for the inaugural Hiroshima Carp.

1954
Hiroshima Carp team photo features Kenshi Zenimura and a man who closely resembles Matsumoto. (PHOTO) Q: Did Matsumoto have a role with the Carp? 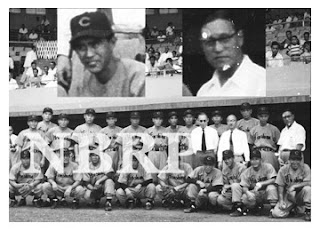 1955
Matsumoto visits as executive director of the Japanese Olympic Association; “visits many Japanese and American friends in for the first time since 1951 …” Later says, “Sure I know Harvey Zenimura and Fibber Hirayama, who doesn’t? They’re almost national heroes in . Each has his fan clubs. So do most of the baseball stars of these days.”[10]

1956
Matsumoto is Deputy Chief Secretary of the Japanese Diet; slated to be named Japanese Ambassador to the .[11]

1957
Matsumoto joins ’s Premier Nobuske Kishi in four-day visit to to improve relations between and U.S. Serving as the Premier’s interpreter, Matsumoto plays in a golf foursome with President Eisenhower and Senator Prescott Bush of Connecticut (father of U.S President G.H.W. Bush (Prez 41), and grandfather of G.W. Bush (Prez 43). Matsumoto also meets with Dulles and MacArthur, among others.[12] 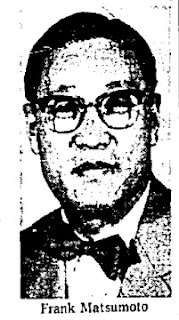 BILL STAPLES JR. of is a baseball historian with a passion for researching and telling the untold stories of the “international pastime.” His areas of interests include Nisei and Negro Leagues history. He is a Board Member of the Nisei Baseball Research Project (NBRP; ), a non-profit organization founded to preserve the history of Japanese-American baseball history and a member of the Society for American Baseball Research (SABR).