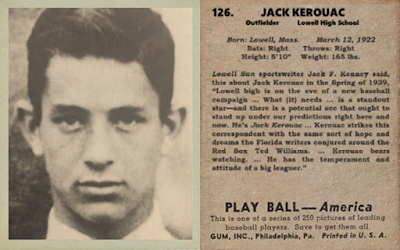 Instructions: 1) Listen to Jack Kerouac read American haikus to sample his voice and Zoot Sim's accompanying jazz riffs; then 2) Read the poem below with those sounds/flavors in your mind. Optional: Enjoy with your favorite beer, wine or spirit.
__________

He has everything
all the goods
but has yet to be tested
Can he swing the ole hickory
under fire in a ballgame
like he does in practice?

This much is certain
this much we know
he will be out there
trying to give it
heart, grit, guts, sweat, smarts
but only time will tell
the world the honest truth

Lookout!
mark my words
the kid from Lowell
is a ballplayer
who bears watching


*Inspired by, and based on, sportswriter John Kenney’s 1939 pre-season review of Kerouac’s potential as a baseball player. Proving once again, that there is no such thing as "a sure thing" in the unpredictable sport of baseball.

Here is a clip of Kenney's original editorial: 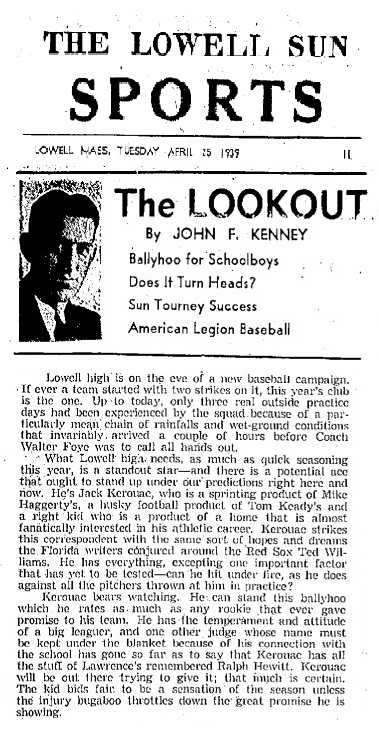 And here's the text for easier reading:

“Lowell high is on the eve of a new baseball campaign … What Lowell high needs, as much as quick seasoning this year, is a standout star—and there is a potential ace that ought to stand up under our predictions right here and now. He’s Jack Kerouac, who is a sprinting product of Mike Haggerty’s, a husky football product of Tom Keady’s and a right kid who is a product of a home that is almost fanatically interested in his athletic career. Kerouac strikes this correspondent with the same sort of hope and dreams the Florida writers conjured around the Red Sox Ted Williams. He has everything, excepting one important factor that has yet to be tested—can he hit under fire as he does against all the pitchers thrown at him in practice?

Kerouac bears watching. He can stand this ballyhoo which he rates as much as a any rookie that ever gave promise to his team. He has the temperament and attitude of a big leaguer, and one other judge whose name must be kept under the blanket because of his connection with the school has gone so far as to say that Kerouac has all the stuff of Lawrence’s remembered Ralph Hewitt. Kerouac will be out there trying to give it; that much is certain. The kid bids fair to be a sensation of the season unless the injury bugaboo throttles down the great promise he is showing.”

Source: The Lookout, by John F. Kenney, The Lowell Sun, April 25, 1939, pg. 11.
About John F. Kenney
John Francis Kenney (b. June 14, 1905, d. March 19, 1960) was a staff member of the Lowell Sun for 36 years. He rose to be the sports editor and promotion manager with the Sun before illness hospitalized him in the 1950’s. He was nominated for a Pulitzer Prize for a series on his fight against tuberculosis, “I Met a Killer,” in 1941. Kenney was also credited as the person who persuaded Rocky Marciano to continue his career after he lost the Golden Gloves heavyweight crown in New York in the late 1940’s. Marciano said it was Kenney’s urging that persuaded him to continue his fighting career after losing the crown to Lee Williams, a decision which ultimately led to Marciano turning pro and becoming the world’s heavyweight champion. Kenney was born and died in Lowell, MA, and was laid to rest at Saint Patrick Cemetery in his hometown.
Sources:
J.F. Kenney Dies; Aided Marciano, Boston American, Mar 20, 1960, pg. 15.
U.S., World War II Draft Cards Young Men, 1940-1947 for John Francis Kenney
Link: https://www.findagrave.com/memorial/177895275/john-f_-kenney 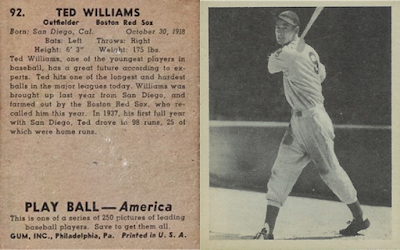 At the time The Lowell Sun published this reference to Ted Williams (April 25, 1939), the future Hall of Famer had played in only five career major league games. How did he do in those five games?

Jack Kerouac, 1939
It goes without saying, Kerouac was no Ted Williams. In fact, there is little evidence to show that he was a star player for the Lowell High School baseball team in 1939. In the box score below from an April 29 game, Jack was not a starter, and came up empty in his one at-bat. On the plus side, he did record a defensive assist in the outfield. 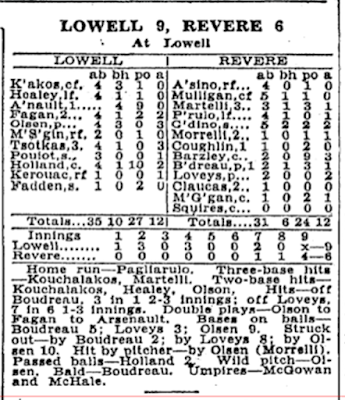 There are just a handful of box scores that feature Jack scattered throughout The Lowell Sun archive, and they add nothing new to the story. Kerouac might have had the speed, a glove and an arm, but he lacked the ability to consistently hit the ball.

And by the end of the season, when Lowell High in the hunt for the city championship, Kerouac was no longer a member of the team. See 1939 team photo below: 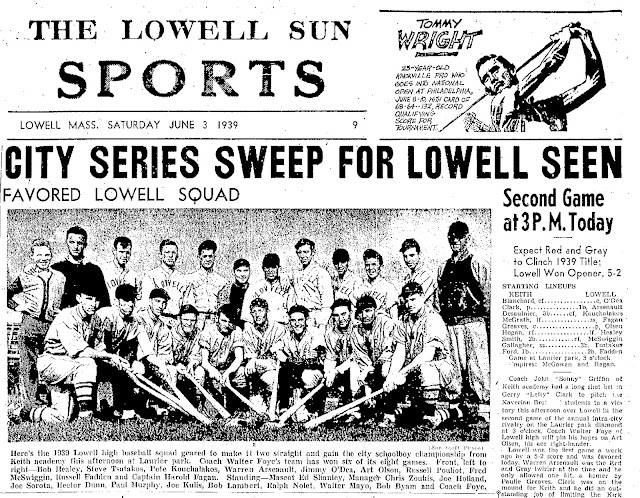 Why was he no longer a member of the team? No reason was ever stated in the press, so we are left to speculate.

Just weeks before making the cut for the baseball team, Kerouac was celebrated as the top performer for the Lowell High track team (five days before his 17th birthday too, on March 12). 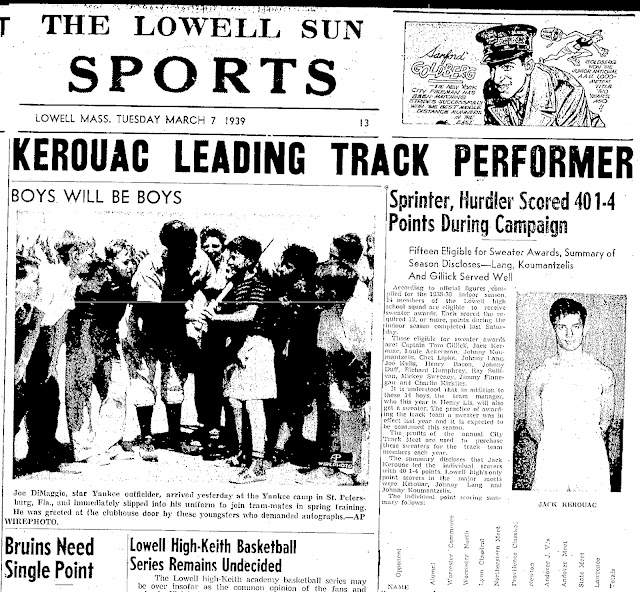 According to the Lowell Sun, Kerouac was splitting his time between the baseball and track teams in the spring of 1939. On May 17, they reported, "Kerouac and Kulis are currently with the Lowell High baseball squad, but as the Foyemen are not playing Friday afternoon, it is almost a certainty that they will don track dogs that particular afternoon." Kerouac competed in the 100 yard dash, 120 yard high hurdles, the 220 low hurdles, and the three mile relay.

In addition to school baseball and track, Kerouac also competed with the St. Louis Cercle club of the Lowell Twilight League. In this news clip, he shows some promise as a ballplayer in the lead-off spot of the lineup.

In late May, Kerouac went out for the American Legion baseball team:

And it appears that he played the final baseball game of his career on July 25, 1939, as a member of the Dracut Dodgers (suggesting he did not make the final cut for the American Legion team). In a 15-2 loss to Kimballs, Kerouac saw action late in the game, when the coach inserted him in left field, fifth in the lineup. He did not get a hit in his one at-bat.


In late August 1939, Kerouac put his baseball playing days behind him and reported to the Horace-Mann prep school in New York City. He later transferred to Columbia University—where he eventually dropped out to find his voice as a writer. 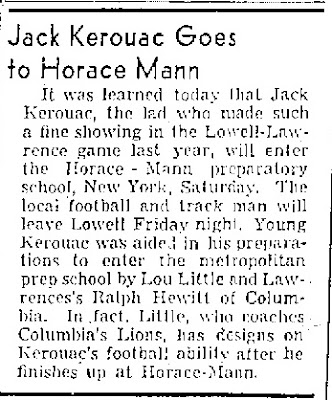 As far as I can tell, Kerouac went the entire season without a hit (one could say, 0-for-1939). Whereas, Red Sox Ted Williams finished his rookie season with 185 of them. How did Ted do his rookie year? Here are Ted's impressive stats for his first major league season:

Unlike Kerouac, Ted Williams did not experience the "Big League Blues." He went on to play 19 seasons and earn the unofficial title of "The Greatest Hitter Who Ever Lived." Ted was inducted into the National Baseball Hall of Fame in 1962 (which, by the way, held it's first Induction Ceremony in 1939.)

Kerouac would go on to achieve literary fame as the "Father of the Beat Generation." He authored several American classics, such as: On the Road, The Subterraneans, The Dharma Bums, Big Sur, Desolation Angels, and his book of poetry, Mexico City Blues. Years later, it was revealed that he cut his teeth as a writer—and expanded his imagination—by developing his own fantasy baseball league. So, it appears that his love for baseball continued long after his final at-bat in 1939.
_____

The Beats, Dharma Bums, & Baseball
During my freshman year of college (fall 1988) I took a course in American Poetry, and there I was first introduced to Beat writers Allen Ginsberg and Gary Snyder. Snyder was my introduction to Zen Buddhism. Kerouac was never mentioned in the class, and it would take another three years for me to discover his writings. As an athlete-artist myself, I found his life and work fascinating, inspiring, and highly influential.

That said, I'll wrap up this post with a personal, Kerouac-inspired sports story. In the summer of 1998, I organized, managed and played with a softball team in the City of Tempe recreation league called "The Dharma Bums." The team name was inspired by my favorite Kerouac book (published in 1958).

Little did I know at that time (I do now that I've seen his stats), but apparently our play on the field was also an homage to Kerouac's ability as a ball player. We showed a lot of promise, we had a lot of fun, but we weren't very good. We finished our season with a perfect record: 0 wins and 16 losses. Kerouac once said, "Accept loss forever." I guess the 1998 Dharma Bums would have made him proud.

Below is the only documentation I have of the 1998 Dharma Bums' existence. I am posting it here for posterity. 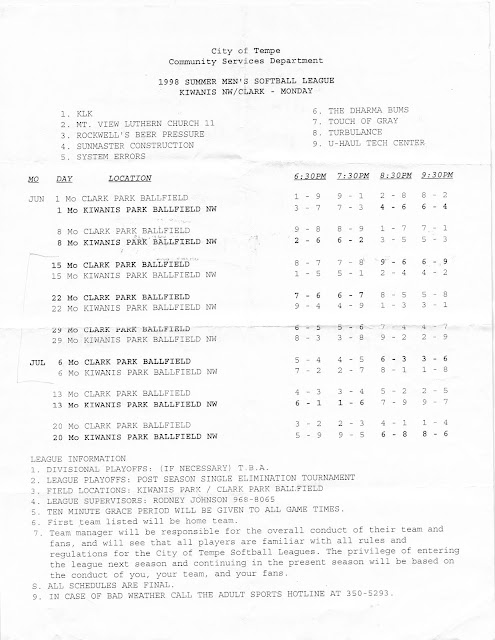 And for those of you who are familiar with the Society for American Baseball Research (SABR), yes, the League Supervisor back in 1998, Rodney Johnson, is the same person who founded the SABR Arizona Flame Delhi Chapter—now known as the AZ-Hemond-Delhi Chapter. Small world, indeed. 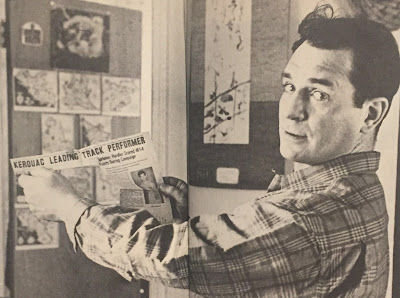