Does the World Series Winner Predict the Outcome of the Presidential Election? 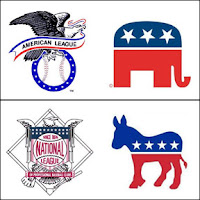 Coincidence Revisited: Does the World Series Winner Predict the Outcome of the Presidential Election?

In the inaugural issue of The Baseball Research Journal published by the Society for American Baseball Research (SABR) in 1972, the editor identified a trend between the winner of the World Series and the winner of the presidential election. Between the years 1952 and 1968, if the American League team won the World Series, a Republican won the election; if the National League won, a Democrat won the election. Below is the original article in its entirety:


By the way, this trend continued for two more election cycles. In 1972 the Oakland A’s (American League) win was followed by a Richard Nixon (Republican) victory; and in 1976 the Cincinnati Reds (National League) win was followed by a Jimmy Carter (Democratic) victory. This correlation between the World Series winner and the presidential party continued for seven straight elections and came to an end with the 1980 victories of the Philadelphia Phillies (National League) and Ronald Reagan (Republican).

With 2012 being an election year I thought it would be fun to revisit this “Coincidence” article to see how the trend has held up since its publication 40 years ago. In doing so, I also looked at the outcomes of World Series and presidential elections prior to 1952 as well. Here’s what I found:


The Question revisited: Is there a correlation between the winner of the World Series and the outcome of the Presidential Election?

It appears that the editor of the original 1972 SABR Baseball Research Journal article needed more data. By expanding the data set we now see that it was indeed just a coincidence … and this World Series-Presidential Election coincidence can be explained by the simple laws of probability.

Probability and Coin Flipping
In the flipping of two coins, the probability that each coin will reflect the same side at the same time can be expressed as: (Heads = H; Tails = T) with four potential outcomes: HT, TH, HH, TT. Thus, the odds are 50/50 that the two sides will match (HH, TT).

And the same is true with two events where the outcomes are binary. In the case of the World Series, the outcome is either an American or National League winner, and in our current two-party system the winner of the Presidential election is either a Republican or Democrat.

Similar to the original 1972 SABR Coincidence article, I thought it would be interesting to explore other “silly” correlations between two seemingly unrelated binary events and the past 26 elections. Doing so would also give us a better appreciation of the World Series fairs as a Presidential Election predictor. Here’s what I found:


Sorry fellow baseball fans. We’d like to think that National Pastime is somehow connected to the pulse of the Presidential Election. But it’s not. This informal study suggests that the winner of the World Series IS NOT a strong predictor of the presidential election.

You might think that a significant factor like the unemployment rate would be a stronger indicator of the presidential election outcome. However, in looking at unemployment trends, increasing or decreasing from the year prior to election year (Increasing = Rep. wins; Decreasing = Dem. wins), I discovered that a correlation between these two events occurred in 15 of 26 elections (57.7%) – the same frequency as the World Series winner (AL = Rep.; NL = Dem.).

Oddly, a better predictor of the presidential election outcome is the “Calendar Day the presidential candidate was born” (Odd day = Rep. wins, Even day = Dem. wins). This correlation has occurred in 17 of 26 (65.4%) elections between 1908 and 2008.

With regards to the streak of seven consecutive matches between League and Political Party victories (1952-1976 elections), this is a common occurrence when comparing the outcomes of two seemingly unrelated binary factors.

How You Really Predict the Outcome of the Presidential Election
So what does this mean for the 2012 election? The best “silly” predictor of the Presidential Election winner is “Calendar Day the candidate was born” (Odd day = Rep. wins, Even day = Dem. wins). But both candidates were born on even days (Romney on March 12; Obama on August 4). Who will win? Your guess is just as good as anyone else’s, or just as good as any seemingly unrelated binary event out there.

In the end, I’d recommend you just flip a coin. Heads, your candidate wins. Tails, the other guy wins. Virtual coins are available at no cost online at: http://www.random.org/coins. (By the way, flip two coins 26 times to see if you can match or beat the streak of seven consecutive matches. My best streak was five consecutive matches.)

So, with the understanding that the probability is 57.7% that the World Series winner will predict the outcome of the Presidential Election, I predict that the New York Yankees (AL) will battle the Washington Nationals (NL) in this years’ Fall Classic. If so, here’s the League-Political Party match-up:


And while I do have my favorites for both the World Series and the Presidential Election, I’ll refrain from sharing them. I can tell you though that if my picks do win, there WILL NOT be a correlation between the League and Political Party (AL = Rep.; NL = Dem.) in 2012.

Guess we’ll just have to wait until Wednesday, November 7th to see how it all plays out.