The Development of Baseball in Japan – A Closer Look

There are several sports history books that reference an essay written by N.K. Roscoe in the early 1930's titled, “The Development of Sports in Japan.”

It turns out that it is a difficult source to track down—it’s not accessible in most library archives. However, thanks to Cameron Penwell, Japanese reference librarian at the Library of Congress, I was able to secure a copy. And because it is such a rare and difficult find, I thought it would be helpful for other researchers if I posted it on my blog for future reference. You can download the article here, and here is the full source:

N.K. Roscoe, 'The Development of Sport in Japan', Japan Society of London, Transactions and Proceedings 30 (1932–33).

As the title of this post suggests, I want take a closer look at the baseball section of his article. In doing so, I'll also unpack some of the interesting elements, bringing to life the people and places he mentions. I’ll start with the author himself. 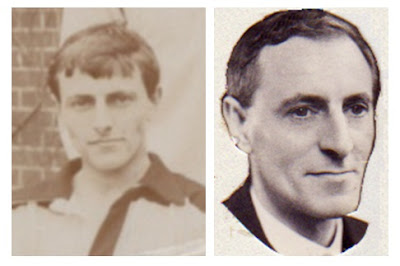 
Through the power of Ancestry.com, I was able to connect with Roscoe’s granddaughter, Anne Sandison Cunningham. She was kind enough to share a brief bio of her grandfather’s educational and professional career (Note: I added the hyperlinks):

Norman Keith Roscoe BA was born in Cambridge, England, on 24 February 1891. He was the son of Canon John Roscoe of Kirkby, Lancashire, and Kate Allen of Frostenden, Suffolk. (His father was a missionary in Uganda and is the author of“The Baganda.”) He was educated at Gresham’s School in Norfolk followed by Pembroke College at Cambridge University.

He joined the consular service and was posted to Tokyo in 1915. There he met and married Anne Struthers, daughter of John Struthers and Mary McCowan of Lanarkshire, Scotland, and the couple had four children. John Struthers was an agricultural scientist with Chilean Nitrate in Tokyo and, in 1921, Norman joined his father-in-law to work for the organisation.

Both families left Japan in the 1930s to settle in Croydon, Surrey, England, and Norman worked for a period for the Foreign Office in London. During World War II they moved to Bletchley, Buckinghamshire, where he became a leading member of the Japanese section at Bletchley Park, the secret location of the German Enigma codebreakers. He died on 20 April 1947 at the Princess Beatrice Hospital, London, at the age of 56, during an operation related to prostate cancer.

Now, let’s dive in. Knowing that Roscoe lived in Japan for over 15 years (1915-1930s), it adds credibility to the facts shared in the article. While it may never be confirmed, there is a very good chance that information Roscoe presents is from primary sources—personal interviews with the pioneers who played a key role in the early development of baseball in Japan.

Below is Roscoe's article. I have added hyperlinks, photos, and notes for background information. Also, corrections to typos in the original text are included in parenthesis.

The Development of Sport in Japan – Baseball
By N.K. Roscoe

Baseball. – As far as popularity goes I suppose there is no other sport in Japan to equal baseball. It can certainly be counted on to draw the biggest crowds, and may fairly be described as the national game. If the errand-boy is late in delivering the mid-day vegetables, the probability is that he has been briefly seduced from rectitude by an impromptu baseball game on a vacant lot, and the graveled undoba of HibiyaPark is flooded during the luncheon hour with shirt-sleeved clerks from the surrounding offices, pitching and catching the soft balls on which a merciful regulations insists.

Baseball is said to have been introduced into Japan in 1872 by two American teachers.

[Note: School teacher Horace Wilson is credited with introducing baseball to Japan in 1872. He was enshrined in the Japanese Baseball Hall of Fame in 2003 for his contribution. Most likely the second American teacher is Albert G. Bates, who is credited with organizing the first formal game in Japan (Wilson only introduced the fundamentals). Bates arrived in Japan in 1873 and, sadly, died of accidental carbon monoxide poisoning in 1875 in Tokyo. He was only 21 years old.]

The late Marquis Komura was one who learnt to play, at this time, and Mitsuga Sengoku and Jigoro Kano were among the cheer leaders.


By 1877 baseball was firmly established in many of the schools, and began to be played outside. This was due to Ki Hiraoka (Hiroshi Hiraoka), who returned from Boston full of enthusiasm, and got men together at the field in Misaki-cho in Kanda. Among the players was Count Aisuke Kabayama. 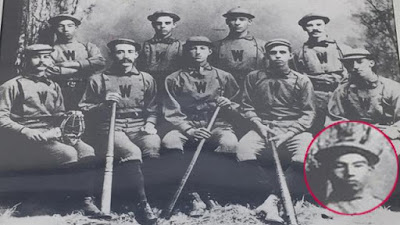 Soon after, he was appointed head of railways at the Shimbashi Railway Bureau, and Hiraoka formed a club known as the Shimbashi Club (Shimbashi Athletic Club), which played at Shinagawa, where he had a ball-ground built.

[Note: According to Kyoko Yoshida, professor at Ritsumeikan University in Kyoto, Kabayama was not a member of the Shimbashi Athletic Club. Before Hiraoka was hired by the railway office and organized the Athletics, there’s a mention he played baseball with Kabayama. Kabayama was a student at a Prep School in Kanda (Kanda Kyoryu School) and was greatly impressed by Hiraoka’s ability to throw a curve ball.]

Hiraoka, due to connections of long standing, often went to the Tokugawa residence in Shiba, and the Daimyo himself became a great ball fan, breaking up several thousand tsubo of his own garden for a ball ground.

In 1896 the First High School team defeated a club organized by foreigners in Yokohama twice running, and this did much to spread the popularity of baseball all over the country.

Keio men took up the game very early, but played in various clubs, until in 1893 they were organised as a school team. Among the first members was Riozo Hiranuma (Ryōzō Hiranuma), now president of the Tokio University Baseball League. Waseda men ran a club for some years which they called the “Cheerful Club,” and it was not until 1904 that they decided that the club should become the university’s official team. In the following year Waseda University for the first time sent a team to the United States. They won only seven of their twenty-seven games, but the visit brought about a new stage in the development of baseball in Japan. From this time on visits of Japanese teams to America and of American teams to Japan have been frequent, and have contributed enormously to the development of the game. In 1915 the Osaka Asahi established the annual Middle School baseball championship games, and this resulted in developing many good players among the younger students and in further popularizing the game throughout the country. In 1925 the Six Universities’ League was formed, and the excitement caused by the final of this event is comparable to that caused by the Cambridge and Oxford1 boat-race.
_______

1. This is the order as quoted in Japan.

[Note: Roscoe graduated from Cambridge … here he is attempting to demonstrate that he was unbiased in listing Oxford second.]

Conclusion
N.K. Roscoe lived a fascinating life, serving during WWI and helping to fight the spread of fascism during WWII. His contribution as a sports historian is impressive as well. Anyone with an interest in the development of sports in Japan is indebted to him for this important historical record.

As a baseball historian with an interest in U.S.-Japanese relations, I would say that Roscoe was the right man in the right place at the right time. He was sports enthusiast living in Tokyo during the prime years of baseball's development in Japan—the Taishō era (1912–1926) and the beginning of the Shōwa era (1926–1989). The information he shares in his 1933 article is both fascinating and credible given that he was a contemporary of many of the pioneers who played a key role in the emergence of baseball's popularity in Japan.

Tip of the cap to N.K. Roscoe for his contribution to baseball history with the article, "The Development of Sport in Japan."