The Japanese American Citizens League (JACL), the nation's oldest and largest Asian American civil and human rights organization, held its Gala, "A Salute to Champions" in Washington, D.C. on September 29, 2011. This year's Gala awarded Asian Americans and Pacific Islanders who have made outstanding contributions to the field of athletics. This year the JACL honored:
My family and I felt truly welcomed at our first National JACL event. Don Wakamatsu (photo below, left)was kind enough to take time out of the evening to sign our Kenichi Zenimura bio for those who bought the book that night. Also, my son Josh, who prefers basketball to baseball, enjoyed getting to meet the NBA pioneer Wat Misaka (photo below, right). And as a board member of the Nisei Baseball Research Project (and baseball fan), I also enjoyed the tribute to Cappy Harada. Truly one of the great Nisei pioneers. 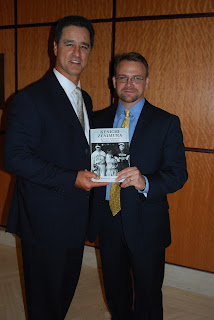 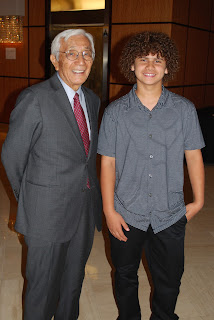